According to the GRTS radio, the Gambian leader made the declaration on Thursday at a meeting in Soma, Lower River Region as he continued a countrywide tour.

President Jammeh condemned tribalism, saying it destabilises the growth, peace and security of a nation.

He further renewed his call to safeguard the integrity of The Gambia by quashing all forms of insecurity.

He also spoke at length on his development aspirations for the country, saying six communities in LRR such as Jenoi, Japineh, Jalangbereh, Sitahuma and Yelitenda will benefit from the second phase of the rural electrification expansion project.

The Minister of the Environment, Parks and Wildlife, Pa Ousman Jarju, called on people of the region to conserve their forests and engage in afforestation to regain the lost forest cover.

He also advised them to ensure cleanliness of their vicinities at all times.

Speakers on the occasion included the Regional Governor Salif Puye, Deputy APRC Women Mobiliser Fatou Njie Fofana, the Regional Chief Alhaji Yaya Jarjusey and Alhaji Ndongo, a native of Kabada, who all hailed President Jammeh for “the unprecedented developments” brought in by his government. 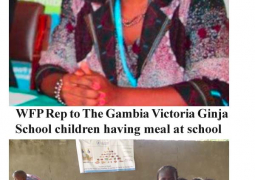