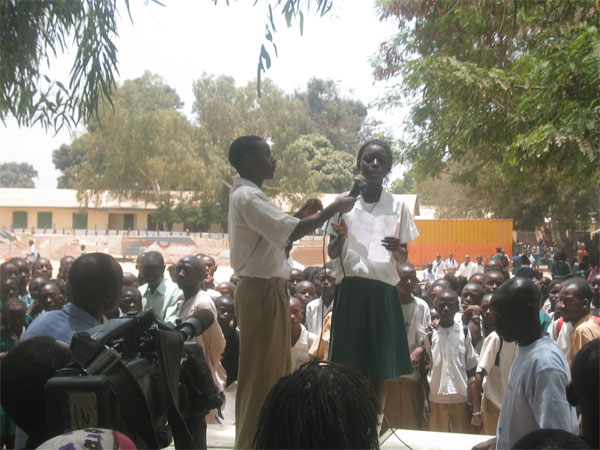 Up to 34 schools in The Gambia recently participated in the World Children's Prize for the Rights of the Child (WCPRC).

WCPRC is an annual event organised globally by Children's World an NGO based in Sweden which works towards educating children on democracy and their rights. Candidates for this year were Jose Fina Condori from Peru, Agnes Stevens from the United States and Somaly Mam of Cambodia.

The event, which was set aside for children to vote for the rights of the child, started on the 3rd of April and ran until the 11th.

In The Gambia the Child Protection Alliance (CPA), a leading body in the protection of children's rights, dispatched officials to the event. The group was led by Mr. Badjie and Mr. Kujabi of CPA and they monitored the voting processes in those schools selected to take part.

Mr. Kujabi, speaking as voting was going on at St. Joseph's ex-Pupil, expressed delight at the successful conduct of voting at the school. He underscored the need for children to be given much protection and care. He revealed that there were no problems encountered during voting at the school and added that it was the first time the school had taken part in WCPRC.

For her part, Mrs. Hannah Cherry, Headmistress at the school, also expressed similar sentiments. She commended her staff for their cooperation.

In Old Jeshwang Simon Bolivar LBS Madame Elisabeth Ndow, Deputy Headmistress, and Lamin J. Ceesay, schools monitor in the Region One, rated the school as one of the best models around. Deputy Ndow expressed happiness at the fact that her school was participating for the first time. She commended President Jammeh and his government for protecting the rights of children.

She further added that her school will continue to participate and do its best for the development of The Gambia. Madame Ndow finally outlined her personal commitment and dedication to continuing the good work and revealed that there is a huge amount of cooperation between staff members at the school.

In Bakau UBS, Adama Samateh and Fatou Ann all emphasised the importance of voting in their lives as it will provide them with their own rights and safeguard their welfare.

Their Principal, Mrs. Tilda Willan, also expressed gratitude to CPA for their continued support in protecting children against violence, abuse and exploitation. She applauded CPA for their remarkable support and urged them to keep up the good work.

In Serekunda LBS, where lots of entertainment was put on, candidates distributed their manifestos and plans for if they are elected.

Addressing their supporters at the rally in the school the three candidates all promised the electorate that, if voted in, they would strive to improve the welfare of young people.

One of the candidates, Agnes Stevens who stood for the United States, informed supporters that her party is the only party they should vote for, adding that they are synonymous with development.

The results of the vote are yet to be released as few schools have sent their votes to the CPA offices in Bakau.