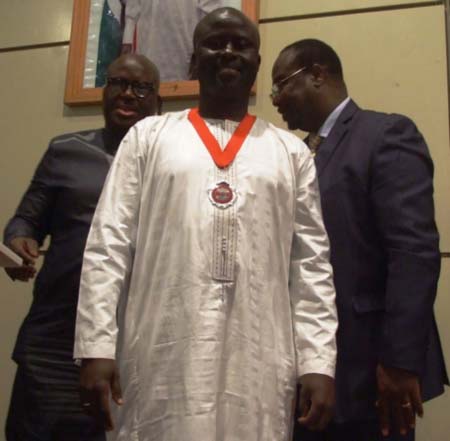 Mr Badjan took the prescribed oath of office pledging to discharge his duties as WAICA president faithfully to the best of his ability and “in accordance with the constitution of WAICA and law”.

He would serve a one-year term as the president of the sub-regional insurance association, formed in 1973 with membership from The Gambia, Ghana, Liberia, Nigeria and Sierra Leone.

Mr Badjan was installed on Tuesday during a dinner bringing to a close the 39th annual general meeting and educational conference of WAICA, which brought together about 200 insurance professionals from across West Africa.

The annual rotating conference was hosted by the Insurance Association of The Gambia at the Kairaba Beach Hotel in Kololi.

Shortly after taking the prescribed oath of office, Mr Badjan, a member of the UK Chartered Insurance Institute, said:  “I stand here tonight feeling deeply honoured and privileged to accept the presidency of our noble association, WAICA.  It is indeed a moment of grace not only for me but the entire Gambia insurance industry.

“I am taking up the presidency to take up a duty to play a role that is not an easy one.  The founding fathers of WAICA had really set out some great objectives and there had been a lot of achievements because we have had dynamic presidents, together with the executive committee, spearheading and driving things.”

Mr Badjan, a renowned figure in the development of the Gambia insurance industry, said he would continue the good work that had been done by his predecessors.

“I make my commitment tonight to continue the good work of all the past presidents, particularly my predecessor, Mr Fashola.  I have been monitoring him and he is somebody that I have always seen to be really committed to what the founding fathers want for WAICA,” he said.

“Ever since he won the presidency [last year], whenever we met, he pushes hard to really get the association to get along with the set objectives.”

A lot to be achieved

Mr Badjan, who has about 25-year experience in insurance, together with the current dynamic governing council of WAICA, he is confident that he could achieve a lot during his one-year tenure as president.

He said one of his main preoccupations is to further enhance and promote the cooperation and collaboration among WAICA members and Africa as a whole.

He said he would leverage on technology to enhance the growth of the insurance industry in West Africa.

“The world is evolving now and one key area that we really want to get along with is the use of technology,” the WAIC president said.

Empirical evidence suggests that countries with better insurance penetration and high awareness are countries that leverage on the power of technology in insurance business.

“Today in countries like Kenya, technology, the mobile phone is used in selling insurance faster and wider.  So it is one area that we really want to get on with,” Mr Badjan said.

A youth himself, the new WAICA president planned to introduce youth forum as part of the sideline activities of the annual general meeting and educational conferences of WAICA.

“The youth are actually coming on and there is a lot they have to offer rather than the old guards always coming and taking decisions,” he said. “So we really want to encourage the youth to be having their forum so that they can come up with good suggestions.”

Mr Badjan said he is aware of the fact that a lot more needs to be done but he believes in action than and “not just making promises”.

Molifa Sanneh, secretary general of the Insurance Association of The Gambia (IAG), said even though the new president is young, he is a role model for many young insurance professionals.

He noted that The Gambia has over the years provided the youngest candidates for WAICA presidency.

“It does not start with Makaireh,” he said.  “All our presidents are youngsters starting from Senor Thomas-Sowe but the new president is the youngest.”

The IAG secretary general said in the Gambia insurance industry, the slogan is youth empowerment, not just women empowerment, as the politicians continue to sing.

The career insurer thanked WAICA for the confidence reposed in the Gambia insurance industry for a Gambian to assume presidency.

Since the formation of the association in 1973, several Gambians have been president of WAICA.  The immediate past Gambian WAICA president was Dawda Sarge, managing director of Prime Insurance Company, in 2012. 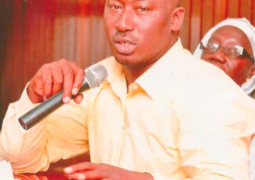