The National Council of The Gambia YMCAs established youth advocacy groups in all the regions of the country. The primary role of the youth advocacy groups is to run community workshops, supported by YMCA field staff, on issues of human rights and citizenship. These groups will also engage local policy makers on these issues to help create an environment in which the rights of young people are better protected and enforced. They will also embark on providing additional leadership, peer education and advocacy training within their respective regions and will further lead the advocacy and community outreach activities of The YMCAs BLF Funded Project.

Amongst the major challenges of the BLF Funded Project advocacy component is to create an enabling environment for 3,000 young people to have a better understanding of their citizenship rights, particularly socio-economic rights help facilitate a balance gender youth representation on two local authority decision making structures in each target region, coordinate and champion at least two credit providers (micro finance institutions)  to implement 'youth-friendly' customer policies in The Gambia, create an environment for the better implementation by local government of the National Enterprise and Employment policy and a firm commitment by central Government to better enforce the ILO core labour conventions, particularly those relating to non discrimination, child and forced labour.

It is expected that by 2012, there should exist an environment where there is a  reduction in the reported incidence of human rights violations against young people in each target region, particularly relating to discrimination in employment and wages, child labour and forced labour, an increase in the number of young people able to access micro-finance from existing service providers and an increase in the level of financial assistance allocated to youth enterprise and employment issues by central and regional government.

It is within this backdrop therefore that The Gambia YMCAs Advocacy group within the month of April 2009 engaged local authorities in Western Region, North Bank and region and Upper River Region. In Western Region through a meeting with the Governor, a community outreach in three places, the Brikama Health Centre, Brikama Market and the Brikama garage, this culminated with a door to door community outreach to over 40 homes in Brikama Jeddah.  The issues raised ranges form high cost of education resulting to the inability to attend school, poverty cause by unemployment, the plight of orphans in the region and single parenting.

According to Miss Fatoumatta Baldeh YMCAs staff in Western Region, the outcome was the interest shown by the various communities resulting to them visiting the YMCAs office in the region for further support and information on how to address their situation.

In North Bank region a radio program was held at the Kerewan and the Farafenni Community Radio stations during which the audience raised pertinent issues such as the need to motivate young people to engage themselves in skills training at the expense of using the canary for greener pastures.  needs a vibrant youth participation in the socio economic sector said one parent who called from Kerewan.  A cluster meeting with the Alkalolus and elders of Kaur also witness some major commitments from the community in engaging the local government authorities to support youth initiatives by providing some financial input towards the future development of trained youth.

In Central River Region, two major activities were held, a community outreach in Bansang and Brikama - Ba. Both activities were attended by the VDC chairpersons, alkalolous and Local government authorities including councilors. The activity in Brikama -ba saw a dramatic change in the response of parents when young adolescent girls dramatized the need to give equal opportunity to girl's education. It was a very saddened moment when the impact of educating the girl child yielded dividend to the extent of a victim supporting her male family members as a result of successfully completing her education.

In Upper River Region, a community outreach program in the form of 'dialogue with the people' was held in Basse Manneh Kunda (Manchester Junction).  The venue was very prime as it is an epic centre of young people who are always found sitting their in 'vous' and 'ghettos'. Their involvement in the program was very resourceful as they were also interested to know how best they can be of greater value to their community, themselves and the at large and how best they can improve their economic status. Speaker upon speaker mentioned how they are unfortunate as most opportunities are more utilized in the Greater Banjul Area (commonly referred to as 'Kombo') and less or none extended to them. Assurance was given to the fact that the YMCAs advocacy group is to dialogue and engage with central government, NGOs and other stakeholders to decentralize opportunities for youth in order for all to benefit.

Reacting from The YMCAs Office in Kanifing on the overall performance of the YMCAs Advocacy Group, The National Director of The Gambia YMCAs Sam B. Thorpe re-iterated the need to create more youth friendly programs.

He said that we are loosing the cream of our society due to unwise decisions taken by youth as a result of search for a better life. He then said that The Gambia YMCAs will continue to champion the many emerging issues affecting young people in The Gambia and called for a multi-sectorial approach and support in this endeavour.

The Project Coordinator of The Gambia YMCAs Joseph Taiwo Peacock, said that the has ever been the safe haven for most West African countries and we cannot at this time afford to allow our most resourceful segment to perish. He further said that for an all inclusive youth friendly environment, all sectors should try to play its part of the game well especially in the implementation of certain government policies, ratification of certain instruments as they relate to youth and the popularization of major government documents in order to empower its citizenry.

The can only be the Singapore of Africa if we start to ''drink from our own wells'' empower our own people economically, socially, culturally and politically and not depend on outsider to do it for us.

The sky is the limit said the Head of state so lets keep flying and aiming for higher heights Said Mr Peacock. 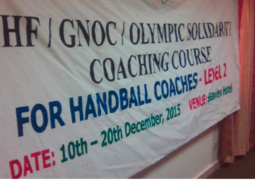