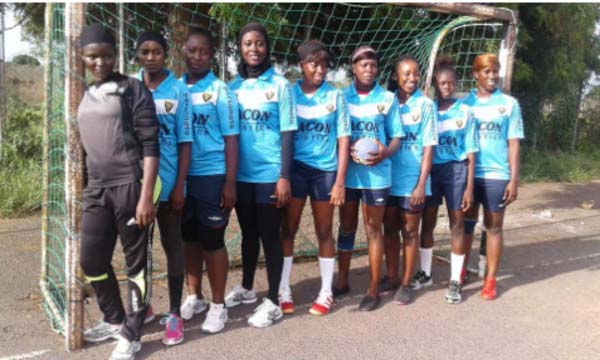 Upon returning from the IHF Challenge Zone Two Handball Championships Guinea Conakry 2016, Warriors, the oldest handball club in the country, hosted its Senegalese counterparts ASC Saloum Handball Club de Kaolack for a series international friendly which wrapped up at the weekend.

A combination of male and female ASC Saloum handball club de Kaolack arrived on Gambian soil on Thursday morning and were installed in Kanifing School during their programs.

The commencement of the triangular international handball friendly played on Friday September, 23 should have taken place at the Independence Stadium in Bakau, but due to a mega Bakau Nawettan football semi-final scheduled on the same day and on the same national stadium compound, host Warriors shifted their opening games to the Senegalese French School in Kanifing.

The games opener was played between the female teams of the two sides with host Warriors allowing ASC Saloum girls to play and controlled the ball to their satisfaction.

ASC Saloum forward Khady Ndiaye was instrumental in front for her side scoring most of the goals for them.

As the game continued to prevail, the gins of Kachically came to Warriors with exceptional Tida Bojang, Amie Manneh, Awa Bojang and Manyima Colley all impressing and they did bring smiles on the faces of their followers.

In the male category also played on the same venue, Warriors boys lost to ASC Saloum by 21-18.

The games were meant to cement the cordial relationship and mutual understanding between the two clubs - Gambia Warriors and ASC Saloum of Kaolack - who played in the second tiers of the Senegalese handball league.

ASC Saloum head coach Titor described the international friendly between the two sides as a milestone in maintaining the aims and objectives of the two giant clubs.

He thanked host Warriors and the entire Gambia handball family for their hospitality.

The event is worthy of emulating, Cham added, while urging handball athletes in the country and their club leaders to continue the brotherhood in the interest of the game as handball is one among the rapid growing sports events in The Gambia.