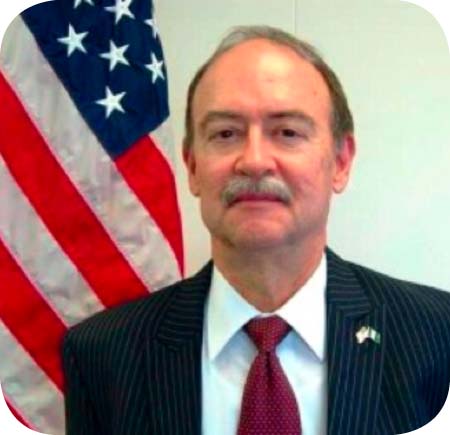 The most senior United States diplomat in Banjul has said that the relationship between Washington and Banjul “is correct” but the two governments continue to have reservations about each other.

Charge d’ Affaires Joseph D. Stafford at the US embassy in Banjul said: “The relationship we have with the Government of The Gambia is a correct one; it is one where we have dialogue at different levels, and we are committed to continuing that dialogue.”

Speaking to journalists on Friday at his residence in Fajara, the U.S. diplomat said the White House has continued to appreciate The Gambia government’s efforts in combating terrorism; its contribution to peace and security in the continent and beyond through its participation in the regional peacekeeping forces.

Similarly, he said Washington recognised President Yahya Jammeh of The Gambia as the sovereign leader of a sovereign country.

“We wish him, his government and his people well. We are not interested in regime change in The Gambia,” said Ambassador Stafford, who was a fully accredited US Ambassador to The Gambia from 2004 to 2007.

In spite of the correctness of the bilateral relations and the appreciation of the Banjul government’s efforts, the relationship between The Gambia and U.S. is not the best.

As Ambassador Stafford said the bilateral relation is in a “transition period”.

The Gambia government continues to see the U.S. as imposing its beliefs and lifestyle on The Gambia and wanting to meddle and pester into the domestic affairs of an independent country.

On the other hand, Washington sees the Banjul government as having to adhere to and uphold various human rights and democratic principles.

The tension between the two countries reach its all-time peak in the recent years as there has not been fully accredited US ambassador to The Gambia, neither has there been a Gambian ambassador to the US for the past few years.

“I recognise that there are challenges in our bilateral relationship,” Ambassador Stafford said.

Asked to further dilate on the root cause of the diplomatic fracas, he said: “I recognize that there are challenges in our bilateral relationship, but I want to assure you that the US believes that the past is the past. We are looking into the future; I expect in the incoming months to have ambassadors in each other’s capital.”

“The U.S. is committed to working with the Government of The Gambia in the spirit of goodwill, to address the challenges and move forward on the basis of mutual respect,” he said.

According to the US diplomat, in order to put the challenges to bed, there is need for Washington and Banjul to have “a frank and open dialogue” where the US will table its concerns and the Gambian side can also bring in their concerns in the spirit of goodwill.

“We can discuss, find areas of common ground, identify what are the areas of difference; we agree to disagree in the spirit of mutual respect,” Ambassador Stafford said.

“We are expecting to have such a dialogue as soon as possible when our annual human rights report is publicly released; we expect that to happen soon. We will use that document as an important part of our dialogue to present the assessment we have of the human rights in The Gambia and look forward in the spirit of frankness and openness to the reaction of The Gambia government.”

The U.S. diplomat said his country has no intention to play god or impose its beliefs on any country. “What we do is call upon the international community and other governments to live up to their obligations under the international agreements,” he said.

He also said any country that signed the UN Charter should respect human rights and democratic values.

The Gambia like the U.S. or any country that signed the charter is expected to be committed to its human rights obligations.

“Every democracy is a work in progress; our democracy has been around for a long time; we think we have made a lot of progress but a lot can still be done.

“So it’s not a question of imposing or trying to impose our views. Human rights are universal values that people impose on themselves not the US imposing on them. It is important for all governments – our (U.S.) government, the Gambia government – to respect the norms, the principles of human rights, democratic values.”

Homos too have rights

The diplomat said Washington is not trying to impose its lifestyle on The Gambia or anyone else.

“But what we are concerned about is that people – whether homosexual, heterosexual, or whatever – are human beings and they deserve to be treated with dignity, respect like any other human being without being discriminated against.”

Though thorny at the moment, The Gambia-U.S. relations is expected to be fully normalised in the coming months as the two governments are collaboratively working on improving relations in the soonest possible time.