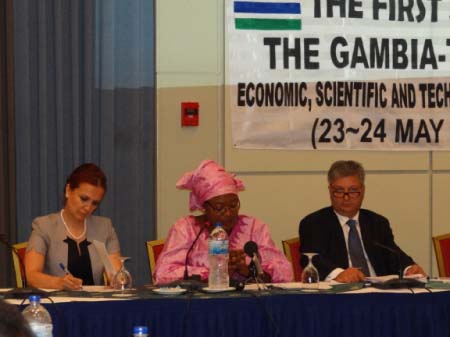 The first meeting of The Gambia-Turkey Joint Economic Commission was held at the Kairaba Beach Hotel from 23 through 25 May.

The main objective of the meeting was to find new ways of further deepening the existing friendly relations between the two nations.

It is a permanent mechanism recently established between the two countries, during a recent state visit to Turkey of President Yahya Jammeh, to take up all matters regarding development, investment, trade and economic relations at bilateral level.

The meeting held in Banjul was described as “a historic milestone” in relations to the second meeting of the commission expected to be held later this year in Turkey.

The head of the Turkish national delegation, Hon Mehmet Muezzinoglu, who is Turkey’s Minister of Health and also serving as Co-chair of the joint economic commission, arrived in Banjul on May 23 with his delegation.

The experts meeting brought together senior government officials from both nations to review the draft minutes of the 1st session of the Gambia-Turkey Economic, Scientific and Technical Cooperation Commission.

In her speech on the occasion, the permanent secretary of the Ministry of Trade, Industry, Regional Integration and Employment, Naffie Barry, said the Government of The Gambia attached great importance to the forum.

She also said the two countries have had cordial relationship over time through the exchange of high-level visits and contacts by leaders and officials from both countries.

“We have also signed a number of cooperation agreements that have strengthened the relationship between the two countries in the areas of political consultations, investment promotion and protection, avoidance of double taxation, health and medical areas, security, industrial and technical cooperation in the defence and cooperation agreement on culture, education, science, youth and sport,” she said.

The meetings of the joint commission were therefore important platforms for the two countries to make strong follow-ups for effective implementation of the agreements, she said, adding that it is hoped the outcome of the meetings would help in developing programmes and activities that would support the development of the two countries.

She said The Gambia would continue to work closely with Turkey to ensure that “our common objectives for the maintenance of world peace and security are achieved.”

PS Barrie further reiterated the commitment of the two governments to promote investment and viable partnerships to strengthen and sustain a long and meaningful relationship between the two nations.

According to PS Barrie, The Gambia, as a member of ECOWAS, has access to a population of more than 250 million people with huge trade and investment opportunities, outlining the sound economic performance and growth of the country over the years.

She therefore called on both nations’ business communities to leverage on this strength to explore opportunities to increase trade and investment.

“I hope the private sector from both countries will further enhance their business networking and linkages and work towards achieving our common objectives of expanding our bilateral trade and investment,” she added.

For her part, Muge Varol Ilicak, Deputy Director General of Agreements at the Ministry of Economy and head of the technical delegation, said the meeting was a unique opportunity to foster bilateral relations between the two countries.

She encouraged members of the private sector of both countries to take advantage of the necessary economic conditions for a secured business environment.

Hon Muezzinoglu and the Gambian co-chair of the commission, Hon Abdou Kolley, Minister of Trade, Regional Integration and Employment, were expected to sign an MoU on May 24, on the outcome to be outlined at the end of the meetings between the technical delegations of both sides.

Minister Muezzinoglu’s team of health personnel with health-related initiatives has already started making some field assessment in the country, from Banjul to Soma, as part of the project implementation.

The various health projects in this framework included an establishment of a national centre to fight against contagious diseases, including Ebola, which recently broke out in some neighbouring countries.

The head of the health team is Dr Oner Guner, General Director of External Relations of the Turkish Health Ministry, and his assistant is Dr Selami Kilic, Head of Department for Overseas Health Policies.

Man in court for careless driving