The Gambia will tomorrow Tuesday celebrate the country’s 49th independence anniversary from the yoke of British colonial rule.

The event, which as in the past few years has been decentralized, will see celebrations in Banjul and the Kanifing Municipality, at which mayors Abdoulie Bah and Yankuba Colley of Banjul and Kanifing Municipality respectively, read out a statement on behalf of President Yahya Jammeh, after a march-past by school children and security forces.

History of the independence movement

The pioneer and one of the original leaders on the so-called Road to Independence of The Gambia from colonial Britain was the Aku named Edward Francis Small. He was born in Bathurst in January 1891. After finishing his education in Freetown at the Methodist High School he gained employment in 1910 at the Post Office. After a number of job changes he became a teacher in 1915. Later he became a clergyman with the Methodist Mission.

He was posted to Ballanghar village in 1917 on a trial period; however, he was soon transferred to Sukuta following what was called the “Ballanghar Incident”. He had given an instruction for the campanile’s bell to be rung to mark the yearly “Watch Night Service” - the gathering of the faithful in church on New Year’s Eve. The ringing, however, annoyed a British merchant living in the village called James Walker. After a heated quarrel, the two men started fighting. While at Sukuta, he became disenchanted and criticized Reverend P. S. Toys who had transferred him. This friction led to him being fired from the church.

The Ballanghar Incident marks the commencement of Francis Edward Small’s career on the struggle for Gambia’s independence from Britain.

In 1920 Small attended a conference in the Gold Coast at Accra in which he gave a speech about the right of West Africans to independent self-rule. It was called the National Congress of British West Africa (NCBWA), and after Small came back to Bathurst he set up the Gambia chapter of the NCBWA.

In the decade that followed, Francis Edward Small was both the editor and publisher of a small publication entitled “The Gambia Outlook and Senegambian Reporter”. It campaigned on issues of importance for the citizens of Bathurst.

In 1928 the country’s first trades union was established called the Bathurst Trade Union (BTU) which managed to get together the Gambia’s first labour walk-out.

He realised that organisation and motivation were the most useful traits for national liberation. It took ten years of discussions, fights and strikes before bearing fruit, but in 1930, the first representative institution was established called the Bathurst Urban District Council and Board of Health.

Small was elected to the legislative council in 1942. He went on to represent the Municipal Council in the legislature between the period from 1942 to 1947. He became the first person to win a popular vote in Gambia when he managed to beat I.M. Garba Jahumpa and Sheikh Omar Faye to be the representative for Bathurst and the Kombos in the Legislative Council. He continued his involvement in political life until he died in early 1958.

In the 1950s, colony-based political parties emerged. The first political party to be formed in The Gambia was in 1951 called the Democratic Party under Reverend J.C. Faye. The Muslim Congress Party was formed a year later in 1952 under the leadership of IM Garba Jahumpa.

The year 1952 also saw the establishment of the United Party (UP) under P.S. Njie which managed to lead the poll in elections to the Legislative Council in 1954. The Gambia People’s Party (GPP) existed for a short while under Saint Clair Joof, but he soon died after he was defeated in the 1954 polls. In 1959 the People’s Progressive Party (PPP) was formed (formerly known as the Protectorate People’s Party) which had a genuine grassroots programme and was formed by the people of the protectorate. It coincided with the constitution of 1960 which extendedvoting rights to the people of the protectorate. It was led by a former veterinary officer from MacCarthy Island Division (Janjanbureh), David Jawara (Dawda Kairaba Jawara).

At the elections held in 1960 the two main contenders were the United Party and the PPP with the result that the PPP won 8 seats while the UP also won 8 seats. Due to the lack of provision of a Chief Minister to oversee the various new departments of government, the Governor, Edward Windley, decided to appoint P.S. Njie in 1961 when the majority of chiefs showed their support for him.

This led to the resignation of Jawara as the Minister of Education and precipitated a political crunch. The colonial government decided to assemble the Bathurst and London constitutional conferences of 1961. The outcome of the talks was the 1962 constitution that heralded the way for internal self-rule.

The result of the General Election held in May 1962 was that the PPP beat its main contender, the United Party, by winning 17 out of the 25 protectorate seats and 1 of the colony seats, thereby giving Jawara an absolute majority in Parliament. This result ushered in Jawara as the new Premier and led to the PPP remaining in power for the next 32 years, until the successful coup led by lieutenant Yahya Jammeh in 1994.

After the 1962 election, DK Jawara went into a coalition government with PS Njie of the United Party to form the Gambia’s first independent government. Independence Day came in 1965 when The Gambia was admitted to the Commonwealth as an independent constitutional monarchy with Queen Elizabeth II being the nominal head of state. Following on a referendum held on the 24th April 1970, The Gambia became a republic with Jawara’s title changing from Prime Minister to President. 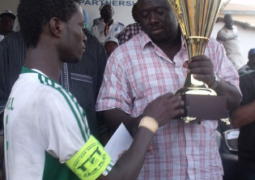