A football team of Gambian students in Ankara, Turkey, on Saturday defeated their Iraqi counterparts 4-1 in the ongoing International Students' World Cup Tournament, 2016.

Organised by Turkish Prime Abroad and Related Communities Directorate, the football competition is aimed at fostering mutual understanding and togetherness among international students in Turkey.

The Gambia's first goal, a hat-trick, was scored by Lamin Dibba within 10 minutes of the game, played at Cinar Spor Tesisleri stadium in Ankara.

The skillful and tactical striker, Dibba, also registered the second goal within twenty minutes of the first half to the cheers of the match spectators, even to non-Gambians.

The Gambian side came from the dressing room more eager to add more goals, Yahya Sonko, who only made his appearance in the second half, netted the third goal.

The man of the match, Dibba, added the fourth goal in the last few minutes before the referee blew the final whistle of the game.The game ended 4-1 in favour of the Gambian students.

In a post-match interview, Modou Beyai, the Gambian team captain, expressed happiness and satisfaction over the performance of his mates during the match.

“I am really happy about our performance in the match even though we were only informed about the game less than 24 hours,” said Captain Beyai.

Malick Jallow, coach and coordinator of the Gambian team, said: “I am overwhelmed about the performance of my footballers and more so, about their sense of understanding as displayed in the pitch.This is what earned us the victory.”

Babacarr Fatty, a technical adviser to the team, said beating a team like Iraq is a great boost for The Gambia in the tournament.

According to him, what is most amazing about the game was the sense of discipline and professionalism displayed by his players on the pitch.

The next match of the Gambian team is slated for the upcoming Saturday. 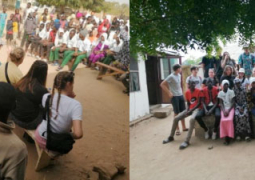