The duo, according to Tim, contributed immensely in ensuring a successful partnership between the two parties.

In an interview with the media shortly after the ceremony, Tim Schulz was delighted to reveal that his American Soccer Club is currently enjoying the services of four Gambian youngsters from the Gambia Rush, which included the key members of former U-17 players, namely Abdoulie Jatta (Aimar), Famara Bojang, Babucarr Jammeh (Mal) and Seedy Bah. He is hopeful of signing contracts with them probably in October.

"I am hopeful of a successful partnership with our Gambian counterparts and plans are already at an advanced stage to take few other youngsters from Gambia Rush Club to join their comrades in the ," Tim pointed out.

The ceremony  was also attended by the Secretary-General of the Gambia Football Association (GFA), Jammeh Bojang who represented GFA boss Seedy Kinteh, KMC Mayor Yankuba Colley, Alkalo of Bakau, among other top officials.

Speaking at the occasion Jammeh  Bojang, who was full of praises expressed delight at what he described as a wonderful initiative. He therefore used the platform to give special thanks to Tim Schulz for associating himself with this great initiative.

He applauded the efforts of the people of Bakau in terms of producing great talents, and as a result assured them of GFA's support at all times.

Kemo Ceesay, the CEO of Gambia Rush Soccer Club in his inaugural statement expressed delight to welcome their partner Tim Schulkz and other invited dignitaries in such a high-profile ceremony.

He also gave a brief introduction of the Gambia Rush Club while appealing to the parents of Gambia Rush to allow their children to actively involve in football, describing the game as a noble profession not just a fun.

The Technical Director of the Gambia Rush Soccer Club, who doubles as the Head Coach of Steve Biko Football Club Abdoulie Bojang gave a vote of thanks. 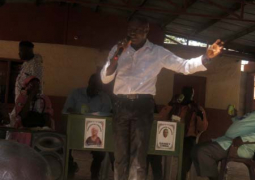