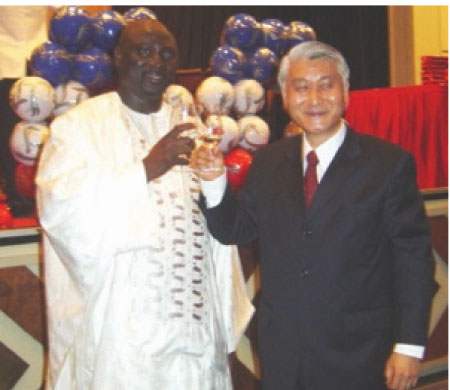 The Government of The Gambia has reassured its Taiwanese counterpart of its continuing support and collaboration.

According to the Gambia’s chief diplomat, Taiwan can count on the West African nation’s continuing support wherever it can be rendered.

“I also reiterate the willingness and commitment of the Government of The Gambia in working closely with the Government of the Republic of China (Taiwan), in a bid to jointly pursue objectives that the two share in common for the benefit of the two countries’ peoples,” he reaffirmed.

Minister Tangara further reassured the Taiwan government through its ambassador to The Gambia that the country would not relent in supporting them both at the national, regional and international levels.

The Government of The Gambia has also been relentless in its call for a just treatment of the case of Taiwan in the international community, said Minister Tangara.

“Just recently in the course of the 66th session of the UN General Assembly in New York, The Gambia offered its full and unwavering support for Taiwan to be a participant in the specialised agencies and mechanisms of the UN system,” Tangara added.

The Gambian foreign minister stressed that Taiwan, with a population of 23 million people, and being one of the world’s leading players both technologically and electronically, has a role in global affairs which is quite relevant.

He recognized the immense contribution of Taiwan in the development of The Gambia, particularly in the areas of health, education, agriculture, defence and information technology.

The Taiwanese ambassador to The Gambia HE Richard R.C. Shih, speeking earlier said it was on October 10, 1911  when Dr.Sun Yat-sen and a group of revolutionaries risked their lives to overthrow the Qing dynasty, and established the first democratic republic in Asia - the Republic of China.

He said afterwards, despite challenges, the government and people of Taiwan moved head on, and went on to transform Taiwan into the freest, most democratic and most prosperous ethnic Chinese community in the world.

The Taiwanese diplomat also acknowledged The Gambia’s support for ROC’s participation in the international arena.

He also gave four examples manifesting the good Banjul-Taipei ties, such as the visit of a group of Taiwanese students to The Gambia in July 2011 as youth ambassadors.

He also noted that 10 Gambian musicians visited Taiwan this year for an international cultural event.

According to ambassador Shih, there are about 200 Gambians studying in Taiwan with, more than 100 students graduating from various universities there and are now contributing to the Gambia’s development.

Mr Shih said that the collaboration on the rice self-sufficiency project between the Ministry of Agriculture and the Taiwan Technical Mission yielded fruitful results in the past two years, and they are hoping for a bumper harvest this year.

Meanwhile, during the centennial reception, many people including cabinet ministers won valuable items at a raffle draw hosted by the Taiwanese embassy.

At the end of a superb buffet, souvenirs such as rice grown by the Taiwan Technical Mission and centennial bags were given to all those present.