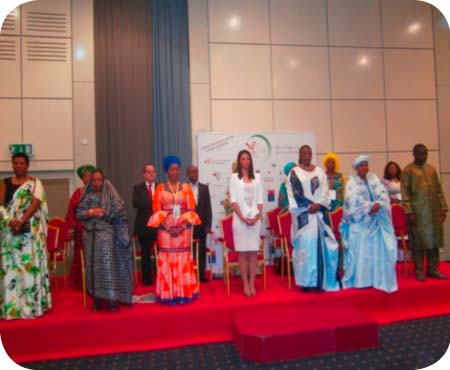 Gambia’s first lady Zineb Yahya Jammeh has declared that The Gambia is on track towards achieving MDG 3, which is “to promote gender equality and empower women”.

The occasion was the 3rd conference of the Women Advancement Forum (WAF), which she officially opened Monday at the Kairaba Beach Hotel in Kololi.

The conference, which runs from 25 to 29 May 2014, brought together the first ladies from Senegal, Burundi, Comoros, Ogun State, River State, Bauchi, and the host nation, The Gambia, as well as other women dignitaries from across Africa.

The theme of the conference is: “Challenges and Achievements in the implementation of the Millennium Development Goals for Women and Girls”.

WAF is a platform which recognizes the fact that women advancement and empowerment is among the most outstanding agents for the actualization of the MDGs and even beyond.

The Women Advancement Forum is Africa’s most attended gender conference for the past three years, and has consistently made its footprint indelible as a formidable platform for deliberations and formulation of affirmative issues affecting the advancement, empowerment, and as a sustainable approach to motivating and inspiring the women of Africa.

Since 2010, WAF has become the annual rallying point for women of different races and age, on issues regarding women’s economic empowerment in business and global partnerships.

Opening the conference, the Gambian first lady, Zineb Yahya Jammeh, said President Yahya Jammeh was very appreciative of the fact that The Gambia was chosen as host country for the conference, “because he is a staunch believer in the potential of women to transform the socio economic situation of the continent and humanity at large.”

“This was why from day one, when he assumed leadership of this country, he immediately increased the number of women in Cabinet, and since then women have always constituted a high percentage of his cabinet at any point in time.”

She added that the theme for the forum – ‘Challenges and Achievements in the Implementation of the Millennium Development Goals for Women and Girls’ - is apt because national policies often do not give due prominence to the special role and dimension of women and girls.

The Gambian first lady further said that the Gambia government places special emphasis on the gender factor in all national policies and programmes, “and the effects of this have already been noticed in our socio-economic development progress. We have almost achieved parity in the enrolment and retention of girls in schools.”

Zineb Yahya Jammeh went on to further state that “current assessments reveal that MDG targets including maternal health, hunger and access to basic amenities such as safe drinking water are likely to be met by 2015.”

She continued: “The Gambia is also on track towards achieving MDG 3: to promote gender equality and empower women…The Gambia’s progress toward attainment of the MDG goals is anchored on the fact that the government had given women their rightful share of positions in the decision making processes.

“We prioritize girls’ education and our government continues to pay special attention to the needs of women and girls in the development agenda,” she added.

Hon. Fatou Jahumpa Ceesay, WAF’s representative in Gambia and a WAF board member, thanked the President, Vice President and the first lady of The Gambia for their support in making sure that hosting the WAF conference became a reality.

Awards were given to the first ladies attending the conference, and the President and Vice President of The Gambia, for spearheading women’s empowerment. 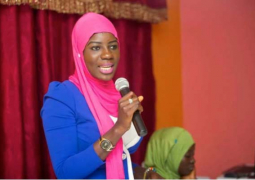