The have moved three places to 92nd in the latest world rankings released on Wednesday.

The Scorpions lack of friendlies during the last FIFA calendar saw them missed another chance to make another signifiant climb.

Paul Put's men are still 22nd in the same as last months' release.

, who were one step ahead of The Gambia in last month has made a significant improvement after securing 72 in the world and 14 in .

This came in the wake of their convincing 2-0  win over   in last month's friendly game.

Hassan Shehata's side lost 3-1 to in their latest friendly.

World Cup-bound are the only other side from the continent in the world's top 20.

retained top spot, while and both improved their positions in the top 10.

European champions lead second-place and the third-placed , with fourth after climbing two places.

Most team slides in the rankings came about because points earned from World Cup qualifiers played in March 2009 lost their value. 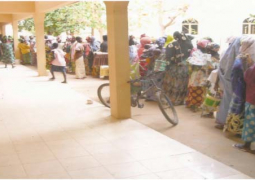