The Sinchu Orphanage situated in Sinchu Alhagie is a practical show of genuine love that was born from the passion of love within  'Les Amis de Gambie ASBL' orgasnisation culminating to the formation of the orphanage at Sinchu Alhagie that now provides love, home and shelter to fourteen orphans. The orphanage is operated by Sia Jongeneel commonly known as Awa Njie as the Director and President and Garjen Beevers both from , as the vice president and her husband. 'Les Amis de Gambie' is poised to helping the poor and has the capacity to take as much as forty orphans for now. They are involved in community development by digging borehole pumps. Society and Development digs out their history, struggles, plans and their need.

She then realized that The Gambia was good with beautiful landscape. She realized also that in Sinchu people were many we then got the land for free. "It is my duty to pay something back," she said.

According to the director and president, the orphanage is the main project they have. They also pay school fees and buy uniforms for 245 children of Sinchu Alhagie and Old Yundum. "We are digging bore hole for the Sinchu community and will serve over 700 inhabitants. We spend D 140, 000 on the Borehole and it will be installed tomorrow Friday. We give solar panels to all workers. We have just bought five solar panels and will be installed. We have set up three football teams and have provided them with boots, jerseys and have made a playing ground including a gallery or a stand," she said.

She has provided a job for 20 Gambians presently. She said when they want a worker for any department they talk with the Alkalo (Mr. Ceesay.) If the alkalo cannot provide the said worker then they go outside of Sinchu Alhagie and find that worker themselves. She said they have fourteen orphans and have a capacity of taking forty orphans.

"We get these children from Social Welfare. They call us to tell us they have a child if we can take the child. They are doing a great job and have been very helpful. We shall care for the kids till they are 18 years of age. Some come for a short transition but others will stay till they are 18 years. By that time they would have finished their school and they are free to stay on their own. We shall employ those who would want to work here. We can also give them a house to live in. When present group finishes at 18, I would have been 60 years," she said.

Sia said during her visit in 2000 to The Gambia she was moved by the physical beauty of the landscape. "When I traveled to the interior of the country I was struck by the harsh reality. With the ever growing number of volunteers, it became necessary to give the project legal structure. Thus the non-profit organization 'Les Amis de Gambie ASBL' was established in 2002. Since then we have helped hospitals, programme for sponsoring children’s education and, most recently the construction of our orphanage, which opened its doors in January 2009," she said.

Sia Jongeneel said there are 66 000 orphans in The Gambia out of a total population of 1.6 Million inhabitants. And it is unfortunate that some children are not able to live with their families, whilst others simply have no one in their family left alive. Thus we began the construction of our orphanage in 2005. Our goal is to be able to offer a welcoming home for approximately 40 children, a home where they can grow up free of charge and prepare for a bright future, she said.

Habby Faal, one of the Managers said taking care of the children was normal for them because they are use to caring for children. "I am happy with the set up we are giving the children what is missing that is love and care. They shall grow to be thankful to the orphanage. We admire Sia and the husband a lot. They put their whole self into the orphanage which is leading it to higher heights. The staff is working hand in hand to ensure the smooth running of the place," she said.

Ndey F. Kinteh another of the Managers was pleased with the help the orphanage was offering. She said they are helping the poor especially those that need it most. Some of these children would have died or become a burden on those who may care for them. But it is quite different with them here. We pray for Sia, the husband and those who are helping the orphanage. "We need help to improve on what we have, the situation is a continuous challenge," she said.

Salifu Ceesay, the Alkalo said they have over 10, 000 inhabitants with only seventeen hand pumps. But today Les Amis de Gambie has today given us borehole.

"Anything they bring here is sustainable. Sia’s project is not a pocket project but a community project. We are happy with the type of assistance they are giving to the poor orphans."

Sia has the clear notion that children need to be able to remain at the orphanage. In addition to ensuring that their daily needs such as food, clothing, health care and education are met, we must pay staff, provide transport and ensure maintenance of the building and surrounding gardens.

The cost is approximately EUR 100 per child per month. "We are asking those who can come to our aid to contact us on (00220) 7317128 or email: (siajongeneel@yahoo.com) Check (www.lesamisdegambie.com)". 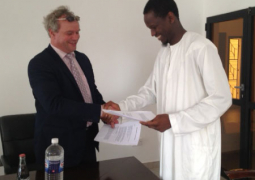