Abdoulie Bojang could be arguably described as one of the most successful local coaches the country has ever produced when it comes to developing youngsters. He is the secret behind the success of a good number of youngsters of Steve Biko Football Club as his tireless effort has been the key to the success of most of them, who have since managed to establish themselves as key figures in their respective European clubs around the world.

Bojang was an integral part of Steve Biko Football Club since he was appointed to take charge of the team in 2004\05 GFA league season. Bojang started his coaching career in 2000 with where he helped recruit quite a large number of youngsters, most of whom are now household names in the country's top flight football.

He guided Biko to its most outstanding league position last season as the Bakau giant Killers finished 2nd 11 points behind Armed Forces who won the 12 club championship title with an impressive total of 44 points in his fourth season as the club's head coach.

In 2002/03, Bojang was given the responsibility to take charge of Bakau Zonal team and helped guide them to the semi-final of the competition in his first season-in-charge.

In 2004/05, he led Bakau to the zonal title after beating Serrekunda West 1-0 in a highly- entertained clash at West Mini-stadium in what was referred to as one of his greatest achievements.

In 2005/06, he was also the coach of Bakau zonal side but could not help the team retain the title after losing to Sukuta in the semi-final in a dramatic penalty shoot-out at the Independence Stadium in Bakau.

In 2008/09, he recorded his 2nd zonal championship title as he guided Bakau to another historic moment by beating 1-0 in the final at the Serrekunda East Mini-stadium. Bakau went on to win all the important accolades, ranging from the leading scorer, most disciplined team, best player award, among other important awards under Bojang's leadership.

He was also very much instrumental in guiding Bakau to the final of the just ended controversial Baby Muhammed Jammeh's Perpetual Cup Competition, but the final was marred by violence. GFA went ahead to award Serrekunda East the trophy, while Bakau was subsequently handed a one-year ban as four key members of the team also received heavy fines after they were accused of causing controversy resulting in the abandonment of the Zonal final chaos.

Lie as he is widely called who spent the entire period of his playing career with his childhood club Steve Biko Football Club was part of the 1990's Gambia Senior National team that took part in the African Junior Championship Tournament.

He graduated to the senior national team after making a name for himself at the junior category in 1992, where he managed to establish himself as one of the most outstanding footballers the country cannot afford to miss.

He also played an influential role in the Gambian side that took part in 1995 Zonal 11 tournament held in .

Bojang's most outstanding performance since his promotion to the Gambia Senior National team came during the qualifying round of the African Nations cup final several years ago against Morocco as he continued to earn the admiration of the Gambian football fraternity, as a result of his brilliant play.

The former Steve Biko midfield kingpin underwent a 6-successful trial with Varberg Bois in in 1995, but he returned home after failing to agree on financial terms with the Swedish giants, where he continues playing for Steve Biko Football Club.

He is among the final 3 nominees short-listed by the sports journalists association of The Gambia, who vie for the most outstanding coach of the year award.

The winner would be announced in an annual sports banquet on Saturday, 10th April 2010, at the Friendship Hostel in Bakau. 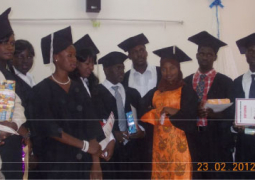