The Gambia Federation of the Disabled on 3 December marked World Disability Day.

The event, held at the Gambia Organisation for the Visually Inspired (GOVI) Recourse Centre in Kanifing, also included the opening of a new project called a goal ball court for blind students in the school.

The ceremony was graced by  cross-section of the disabled community in the and local dignitaries.

The theme for the celebration was “Together for a better world for all including persons with disability in developments.”

In his speech on the occasion, Dodou Loum, vice chairman of the Gambia Federation of the Disabled, said the day was chosen by the international community to reflect on the plight of persons with disabilities. The day, he said, has been celebrated internationally since 1993.

He said the day was not put aside just for the sake of bringing people together; but it was due to the UN recognition that disability is a growing reality across the world, particularly as the world population grow, people live longer and chronic health conditions get worse.

He stated that disability is a human rights issue, and can happen to anyone at any time.

He therefore called on the development partners, philanthropists and the general public to recognize that disability is something real and complex for the country.

Mr Loum said that by joining together and making simple interventions for people with disability, especially in health, education, rehabilitation, employment and livelihoods, they could limit the impact on disabled persons.

He lamented that many of the barriers facing people with disabilities are manmade, such as stigma and discrimination in some communities.

Mr Loum said they are still advocating for the signing, ratification and domestication of the UN convention on the rights of persons with disabilities and adoption and implementation of the National Disability Policy. They would continue working with government for this to happen, he added.

In his remarks on the occasion, Ali Sallah, head teacher at for the Blind, said the goal ball is a game invented in 946 by an Australian and a German called Hanz Lorencezen and Sett Reindle.

The game was developed to rehabilitate post-World War II veterans who became blind.

He said that over the years the game  has gained more international acceptance and recognition.

Mr Sallah said he and Mr Kalilu Saidy started the game in 2006 in The Gambia, which was made possible through the training they had with friends from the Royal National Institute of the Blind in .

He said that due to the love players have for the game, in 2007 they took the initiative of contacting their friends, Mr and Mrs Feller, to know if they could offer them a helping hand in providing the standard court.

He said the call was finally answered when in 2009 the British parliament sports committee funded the said project.

He therefore urged them to take care of the facility and put it into good use.

Speaking on behalf of the sponsors, Philip Feller said it was the dream of their colleagues to have a goal ball court to Paralympics standard and after long negotiations with members of GOVI board, permission was given for them to go ahead.

This brings him to the sad part that after more than 20 years of working with GOVI board, they have attributed their own goal and theirs of providing visually impaired children of The Gambia with their own purposed built school.

“It is heartening that the government has now and for some time strongly supported the education of visually impaired children as well as the disabled groups,” Mr Feller said. 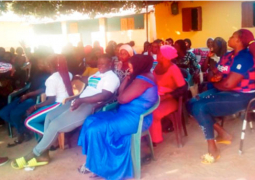 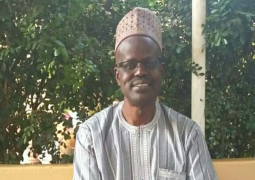