Ebou Sanyang widely known as Jet-Li who walked into Point's office yesterday told this reporter that the ultimate aim and objective of the Gambia Kungfu Association is meant to spread Kungfu in all parts of the country.

According to Jet-Li, who spent almost nine-years in the Kungfu Association, the reason of encouraging so many Kungfu clubs in the country is part of their efforts to help popularise Kungfu nationwide in a bid to attract the interest of quite a large number of Gambian people, and he is of the belief that Kungfu will attract immense participation if all hands are on deck.

The 24-year-old who joined Dao Kungfu Club in Fajikunda in 2000 was pronounced black belt holder nine years later as a result of his continuous hard work and physical approach towards the training.

Jet-Li finally used the platform to advise people to stop undermining Kungfu, given the fact it is a very important game that can give the participants good health, physical fitness, among others.

Saturday's programme is expected to be graced by the Alkalo of Mandinaring, including other invited high dignitaries. 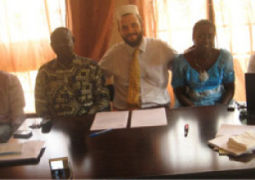