The for Gold fundraising committee, under the leadership of Tombong Saidy, yesterday sealed a partnership deal with Gambega, a beverage Coca-Cola company in The Gambia, as part of the fundraising drive for the country’s participation in the Africa Nations Cup and the World Cup finals.

Held at the Gambega conference hall in Kanifing, the signing ceremony of the memorandum of understanding (MOU), spearheaded by the Minister of Youth and Sports, Honourable Sheriff M.L. Gomez, is mainly meant to help the Gambia fundraising committee members in their drive to raise an estimated amount of D32 million for The Gambia’s participation in the Africa Nations Cup and the World Cup tournamentsfor a four-year period.

This, according to the man at the helm of affairs Tombong Saidy, includes all the categories of the national teams, especially the senior national team who are preparing to face in the Africa Nations Cup qualifier in in the next two weeks.

The minister of Youth and Sports in his statement outlined the significant role the Government of The Gambia, through the leadership of President Jammeh, continues to play, noting that the Gambian leader is the inspiration personality behind the establishment of this fundraising campaign.

"The inspiration behind this noble initiative is no other person than President Jammeh, who deemed it necessary to set up a fundraising campaign to ensure that we raise the needed funds for the country's participation in all the international tournaments including the FIFA World Cup in Brazil," Hon. Gomez, who has challenged all and sundry to take ownership of Gambia for Gold to ensure the country reaches the finals of the Africa Nations and the World Cups, told the gathering.

Hon. Gomez, however, called on all Gambians and friends of The Gambia, including those in the diaspora, to play their part in ensuring the for Gold realizes its ultimate objective.

"It is agreed that the best way to mobilise the resources is to form a fundraising campaign in a bid to raise the needed funds for the participation of all our national teams," said the permanent secretary of the Ministry of Youth and Sports, Mambanyick Njie, who also spoke at the signing ceremony.

Mr Njie used the occasion to thank and appreciate the media for the significant role they continue to play in promoting the fundraising campaign initiated few months ago.

The outgoing country manager of Gambega Company, Seth Adu Baah, who represented Gambega at the signing ceremony, said he was happy for "the noble initiative".

"We are happy for the 'beverage' partnership and we have a strong interest in football, which we are very much interested in developing and we will also be committed to the deal to make sure all the support is given to for Gold," Mr Baah added.

The general manager of Elton Gambia, Bakary K. Jammeh, and Gambia for Gold committee chairman Tombong Saidy, who both spoke at the signing ceremony, shared similar sentiments, calling on all and sundry to play their part in making this initiative a success.

Since the Gambian leader President Jammeh recommended setting up a massive fundraising campaign, the ministry of youth and sports, under the tireless effort of Sheriff Gomez, took it upon itself to immediately start the initiative to ensure that the country realise its objective in booking a place in its targeted international outings.

And as a result, a 25-man committee was launched by the Vice-President of The Gambia, Dr Isatou Njie-Saidy, at the Kairaba Beach Hotel tasked with the responsibility of raising the needed funds for this noble initiative in the next four years.

The committee, since its formation few months ago, has succeeded in partnering with four companies who have all confirmed their support for ' for Gold - It's our time 2012-2014'. 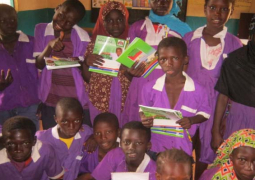