New representatives have been nominated  and elected to serve on the management body of the Gambia Country Coordinating Mechanism (CCM) managed through a grant of the Global Fund, from January 2012 to December 2013, following the end of term of other members of the CCM.

At a ceremony held at the Paradise Suites Hotel on Thursday, an election was held during which delegates voted for the positions of CCM chair and vice-chair and for other offices in the CCM.

The election and subsequent inauguration brought together participants from the public and private sectors.

At the end of the election, the permanent secretary of the Ministry of Finance and Economic Affairs, Mod A.K. Secka was elected as the chair of the CCM while Madi Jobarteh of TANGO was also elected the vice-chair.

The CCM leadership and its election was established in response to the requirements and recommendations of the Global Fund to fight AIDs, TB and Malaria as well as to serve as an overall guiding body for the use of Global Fund’s resources.

Speaking at the ceremony, the Minister of Health and Social Welfare, Madam Fatim Badjie, expressed her ministry’s appreciation for the professional manner in which the CCM governance instruments were revised and in incorporating the six Global Fund requirements.

Minister Badjie said the success of the Global Fund grant in The Gambia relies on a strong and well functional CCM with technical guidance of and collaboration with multi-sectoral partners, and particularly the management and implementation of programmes by in-country partners including governments, civil society organizations, faith-based organizations, academics and research institutions, the private sector and people living with the diseases or their representatives.

She added that the CCM’s role in mitigating risk is by identifying implementation bottlenecks and weaknesses in performance or control systems and to stimulate rapid remedial actions amongst key stakeholders.

Millennium Development Goals (MDGs) without accelerated efforts to prevent the spread of TB, HIV/AIDS and Malaria, he said, are diseases that will continue to roll back progress and hard-earned gains and intensify poverty and human suffering in Africa and the world at large.

According to Minister Badjie, the cumulative funding that has been approved for The Gambia is US$97,174,099 (Ninety seven million, one hundred and seventy four thousand and ninety nine dollars) and of this amount, US$62, 067,065 (Sixty-two million, sixty seven thousand and sixty five dollars) has so far been disbursed. “This is indeed impressive,” she said.

Minister Badjie revealed that the three diseases - Malaria, TB and HIV/AIDS - are the greatest threat to the security and development of the world, and a big obstacle to the attainment of many globally agreed goals.

The Health minister finally expressed gratitude to partners in the fight against the three diseases and to CCM for their commitment to supporting such programmes, among other things.

For his part, the newly elected chair, PS Secka, said the funding has been increasing for a long time and they have been doing an excellent job, for which he recommended Global Fund.

The newly elected chair highlighted three of the Global Fund’s inventions, which complements government’s efforts, “because people would have come to government for some redress if Global Fund was not providing funding”.

She said the stepping in to complement government’s funding of the health budget is a big leap for Global Fund; in addition” they are giving hope to the affected. Without helping the affected the situation would have been desperate, he said.

“The objectives are to reduce all the diseases as challenges,” she said, adding that they have seen some improvements particularly in the area of Malaria.

PS Secka  said further that the issue of documentation will be encouraged in the two-year period and the new CCM will build on what the outgoing members have done and improve upon what they have delivered.

The outgoing chair, Ahmed Jaegan Loum, commended the members for coming out to voting for the elected chair and vice chair. Sheikh T. Louis conducted the election. 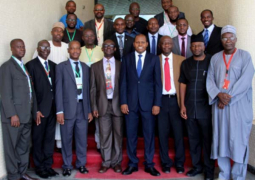