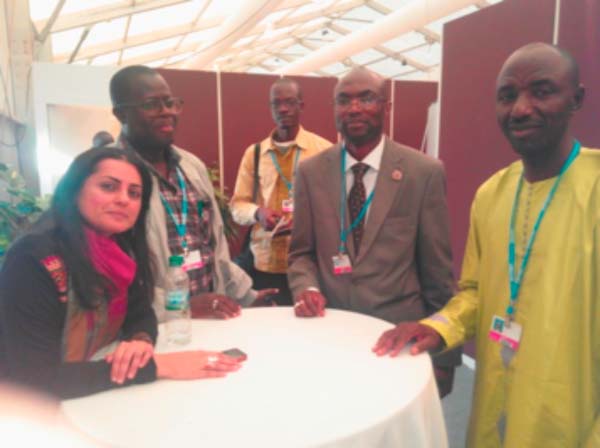 The 22nd Conference of Parties to the United Nations Framework Convention on Climate Change (COP22), serving as the 12th meeting of Parities to the Kyoto Protocol (CMP12), opened last Monday in the city of Marrakech, Kingdom of Morocco.

The two-week meeting, coming barely four days after the entry into force of the Paris Agreement, which sets a legally binding target for Parties to stem global warming to 2 degrees Celsius, will feature its first meeting (CMA1) this week, when high-level government officials from all over the world will also converge at the meeting to further cement the climate change agenda.

After the opening ceremony, the Gambian multi-sector delegation has been following and participating in all negotiations, including the most relevant side events, to make the most out of the conference.

The team so far under the leadership of Hon Minister Jarju and under the coordination of the permanent secretary, Ministry of Environment, Climate Change and Natural Resources, Ousman Sowe, comprises around 50 delegates from a cross-section of all stakeholders, ranging from policy makers including a representative from the Gambian Embassy in Rabat, Consul  Omar Baldeh,  Gambia Embassy in New York and senior government officials to climate change experts, finance, agriculture, gender and youth specialists, civil society organizations and public and private/hotel sector representatives.

In his introduction to the respective and collective roles of delegates at the COP, PS  Sowe earlier in the week expressed confidence in the capacity of the delegation to live up to expectations in Marrakech, given their past experience and the track record of the country in the field of climate negotiations and action.

Moreover, said Mr. Sowe, the delegation has the full political support of the Gambia government and the leadership, who have demonstrated full political will and support in every domain that interests the development, lives and livelihood of Gambians.

The representation and attendance of the Vice President at the High Level Segment is a clear manifestation of high-level government commitment, he added.

Alpha Jallow, the National Focal Point of UNFCCC in The Gambia, briefed the delegation on the negotiation procedures and allocated respective pertinent tasks to all delegates, given their areas of specialization and excellence.

He also explained the processes involved in the negotiations, as well as the dos and don’ts.

Bubu Pateh Jallow, veteran negotiator of The Gambia, emphasized what Alpha said and went on to give indications as to where to get full information on what to follow during the negotiations, particularly those issues relevant to the country, which, however, are inseparable with those of Least Developed Countries (LDCs), Africa and the Group of 77 and China.

These groups, he said, though they may have divergent views, are bound to be supportive of each other in the process and, therefore, negotiators need to avoid voicing contradictory positions.

It would be recalled that The Gambia, through the leadership of the current Minister of Environment, Climate Change and Natural Recourses, Honourable Pa Ousman Jarjue, is known to have pushed the core tenets of the Kyoto Protocol which, through the Adhoc Working Group on the Durban Platform for Enhanced Action (ADP), has given birth to the Paris Agreement, which is the most comprehensive and legally binding mechanism to solve global climate change problems so far.

Mr Jarjue is the predecessor to the current LDC group Chairman and has, during his tenure, successfully steered the affairs of the group, replenished the Least Developed Country Fund (LCDF) to the tune of 200 million US dollars to which every LDC had an equal drawing right of twenty-five million Us dollars.

The Gambia delegation has so far held two briefing and debriefing sessions.

The last one held on Saturday, was attended by the Hon Minister Pa Ousman Jarju, who was briefed by the respective delegates in the delegation on their meetings and engagements during the week.

The minister in-turn provided briefing and reported to the Vice President at her residence on the evening of Sunday, November 13.

The Vice President of The Gambia among other world leaders is expected to address the 22nd UNFCCC Conference of Parties in the Moroccan city Marrakech on Wednesday November 16, 2016.