Lamin Sambou, head coach of the national U17 team, remains positive about his side’s chances of achieving the desired result as the reigning champions leave for today.

The two-time African champions at the U17 level have intensified preparatory efforts ahead of what promises to produce a titanic first leg of the qualifying campaign in this weekend, amidst high expectations from the Gambian fans following the U20 team's success recently.

Coach Sambou and his boys will travel to on the back of an unconvincing and pulsating 1-1 draw against a formidable Senegalese national U17 team that held them to 1-1 draw in Saturday's friendly international in preparation for the weekend’s encounter in the qualifiers.

Sambou, who is in charge of the U17 national team on temporal basis since the departure of the Egyptian tactician Tarik Siagy some months ago, told reporters at a press conference that the friendly gave him the unique opportunity to assess the level of his team and the performance of some new players.

Asked whether the game was an experimental one, Sambou said: "Yes, it could be an experimental game meant to test the players in a bid to select his final squad that will travel to for the weekend clash in the qualifying campaign en route to in 2011."

Despite that The Gambia had a disappointing draw against , Sambou is hopeful of a qualification berth.

"The approach in will be to at least secure a point and any thing more than that is a bonus," Sambou told a team of journalists at the Independence Stadium.

For his part, the head coach of said The Gambia had given them a good test with some "wonderful" performance.

"We hope to continue our preparation ahead of the weekend encounter against , who are a powerhouse in continental football and hopefully we will get a good result," he said. 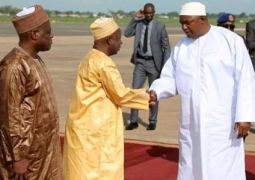