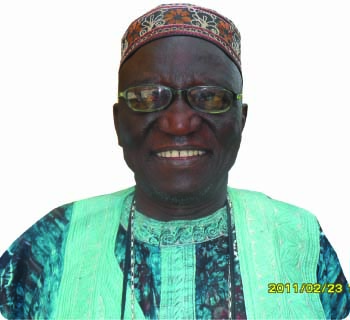 The Secretary General of the National Council of Seyfolu, Chief Lamin ST Jammeh of Upper Niumi district, has declared that the as a sovereign country belongs to the Gambian people, and whatever form or structure it takes, in terms of governance, has to be designed and implemented by the Gambian people.

Chief Jammeh, who is the spokesperson of the council, made these comments to the press when representatives of the council paid a courtesy call on the Speaker of the National Assembly Hon. Abdoulie Bojang Wednesday.

His comments came following a recent nationwide tour the council spearheaded, focusing on strengthening Gambian traditional institutions and cultural values and norms, but which was reportedly used as a platform to campaign for the Gambia to become a monarchy.

This was the so-called kingship issue, a topic that has generated a lot of attention, publicity, debate and even condemnation from some quarters.

"The National Council of Seyfolu is aware that belongs to the Gambian people, that the as a sovereign country has its authority in the hands of the Gambian people which is explained in the constitution of The .

"The bottomline of it all is that Gambia's governance whatever forms it takes, whatever structure is given, has to be designed and implemented by the Gambian people," Chief Jammeh told waiting journalists shortly after they met with Speaker Bojang.

According to Chief Jammeh, good governance is all about the people's involvement in the decision making process.

"Aware of that, we think it is necessary at all stages to discuss with the Gambian people what our thoughts are in order to ensure that they are prepared and equipped for whatever decision they take in the supreme interest of the land," he added.

Chief Jammeh also told reporters that the vision of the National Council for Seyfolu is based on the conviction that sustainable development has to be one built on a rock solid foundation, and belief that the fabric of any society is embedded in its cultural value systems and practices.

"We in the National Council of Seyfolu shall strive to play a lead role in the establishment of a modern in which modern development shall thrive side by side with appropriate consolidation, strengthening and expansion of traditional institutions and authority based on the consent of the citizenry," he further stated.

"We have seen a lot of problems. African countries are developing their infrastructure; they are developing socially only to be overtaken by events one day, because of crisis," Chief Jammeh said, adding that it is their belief that the reason why this is happening is that the fundamental basis has not been based on culture.

"The fundamental authority for governance, administration and development must originate from the will and survive by the consent of the people," he concluded.

Meanwhile, the chiefs were led to the Office of the Speaker of the National Assembly by the Paramount Chief, Demba Sanyang, accompanied by Dembo Badjie, Chief of Foni Bondali, and Fafanding Kinteh, Chief of Lower Baddibu.