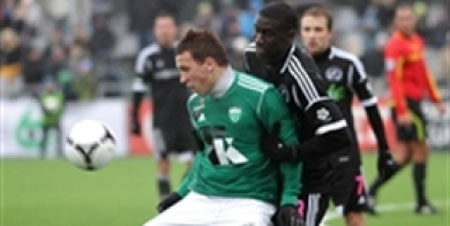 A disciplinary committee of the National Football Association of Estonia will on Thursday review the incident surrounding football fans’ mockery and chants of racist sounds and slogans against ’s footballer Yankuba Ceesay, who plays for FC Kalju.

The Estonian premier league football season, which got offto what could bedescribed as a shocking start at the Sportland Arena on Saturday,has shown FC Levadia fans shouting racist monkey sounds at a black football player, according to sports.err.ee.

Gambian international midfielder, Yankuba Ceesay, who recently signed with FC Nõmme Kalju, was replaced in the beginning of the second half for Melts in the 46th minute, in his debut game for the new club.

Later, the visitors, Levadia fans, erupted with offensive sounds similar to animal noises during the 65th and 73rd minutes. The fans were also said to have let off illegal fireworks at the game, which ended goalless.

Indrek Petersoo, press representative of Levadia, told sport.err.ee that he had been in the crowd and had witnessed the detestable situation from up close.

He said Levadia would take disciplinary measures against the offending fans.“On behalf of Levadia, there is nothing more to be said than that we are truly ashamed of the actions of this group of people,” said Petersoo. “Such hooliganism is harmful for the football club. We spoke to some of the fans before the season began to make understood the actions that are not acceptable in the stadium.”

He added: “It was sad to see that this was not made clear. On our behalf, we would like to apologize to the Nõmme Kalju player who was definitely insulted. We will do everything we can to see to it that such incidents are not repeated in the future.”