Gambia’s delegation to the third Islamic Solidarity Games left the Gambian shores in the early hours of Thursday for Indonesia.

The Games are set to take place in Palembang, the capital city of the South Sumatera in Indonesia, from September 22 to October 1,andtwo athletes will spearhead Gambia in two disciplines – athletics and taekwondo.

One (1) athlete was chosen for the athletics event.He is Adama Jammeh who travels withDodou Capi Joof president of Gambia Athletics Association.

The athletics event is scheduled to take place from September 25 to 29.

In taekwondo, SheihouTouray wasnamed to defense Gambian coloursatthe Games and he is accompanied by AlhagieFoday Fatty the Secretary General of Gambia Taekwondo Association.

The Taekwondo events will be held from September 27 to October 1.

The Islamic Solidarity Games is a multinational, multi-sport event. The Games involve the elite athletes of the Organisation of the Islamic Conference.

As many as 56 countries are expected to participate in the Games, which will feature 13 disciplines like athletics, badminton, basketball, football, weightlifting, karate, archery, taekwondo, tennis, volleyball, wushu and swimming.

The first edition of the Games was held in 2005 in Saudi Arabia. The second event was cancelled after it zhad been originally scheduled to take place in Tehran in October 2009. Azerbaijan will host the 4th Islamic Solidarity Games in 2017.

AbdouShyllon….. Head of the Delegation 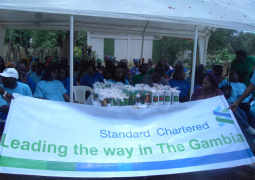