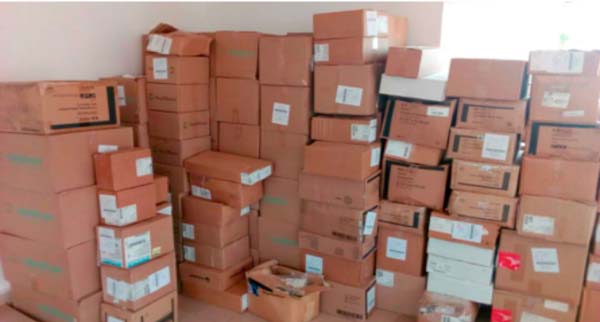 Gambega Limited, in partnership with Coca-Cola Africa Foundation and Medshare through the Ministry of Health and Social Welfare, yesterday donated a forty-Foot container of medical supplies worth US$200,000 to SerreKunda and Bansang Hospitals, at a ceremony held at the SerreKunda Hospital ground.

Speaking at the handing over ceremony, the Minister of Health and Social Welfare, Saffie Lowe-Ceesay, expressed great delight and pride for the Ministry of Health and Social Welfare and people of The Gambia to be presented with a 40-Foot container of medical supplies by Gambega Company Ltd in collaboration with the Coca Cola Africa Foundation and Equatorial Coca-Cola Bottling Company.

This was not the first time such items have been donated to the Ministry of Health and Social Welfare because as a similar donation was made to EFSTH some time ago, she revealed.

Minster Lowe-Ceesay further revealed that the container they have received contains wheel chairs, hospital beds and mattresses, furniture, assorted surgical items in addition to several other health care equipment that would go a long way in improving health service delivery.

“It is important to note that healthcare is an expensive undertaking, hence the need to forge partnership with the private sector cannot be overemphasized,” she countered.

She called on all to emulate Gambega in supporting the Ministry of Health and Social Welfare for the realisation of her policy goals and objectives.

She assured that the donated items would through the supply chain and distribution system to reach those communities/facilities most in need.

She also thanked Gambega and its collaborating agencies for choosing The Gambia for such a valuable donation.

Also speaking at the handing over ceremony, the Director of Health Services, Modou Lamin Waggeh, said medical equipment are tools that are indispensable for effective and efficient preventive, diagnosis, treatment and rehabilitation as well as the attainment of internationally agreed health related development goals such as the millennium declaration.

Mr Eugene Allen, the Country Manager of Gambega Ltd, said over the last five years, the Coca-Cola Foundation has donated three containers of medical equipment to RVTH which is benefiting thousands of people residing in the country.

“As a global business operating on a local scale, we work together in harmony with all our local partners and stakeholders in order to preserve quality health and safe natural environment for our future generations,” he stated.