Justice Emmanuel Nkea of the Special Criminal Court yesterday remanded one Muhammed Muktarr, an employee of Gam-food, who was arraigned on a three count-charge of stealing and fraud.

According to the particulars of offence on count one, between January and September 2012 in the Kanifing Municipality, the accused person, Muhammed Muktarr, being an employee of Gam-food, allegedly stole D1,120,000 worth of building materials.

Count two stated that the accused person between January and September 2012, in the Kanifing Municipality, stole 9,350 cartons of chicken legs.

Count three stated that he engaged in fraudulent false accounting in order to defraud Gam-food of D5,550,000.

He denied all the charges preferred against him, and was subsequently remanded in custody.

The case at the Banjul Magistrates’ Court was filed since 7 September 2012, counsel said, adding that it was the same subject matter, and the charges were the same with the one before the High Court.

He said the accused person was granted bail of D10,000,000 and the matter had not been withdrawn, neither it was transferred to this court.

Counsel then asked the court to proceed on the same bail conditions, as there was no difference between the two cases.

In response, the Director of the Public Prosecutions, S.H. Barkun, told the court that the matter was no longer pending at the lower court, and if they were to apply for bail, let them do so formally.

Lawyer Camara then said that there was no law in this jurisdiction which stated that bail application must to be made formally, adding that they are dealing with the fundamental rights of the application.

The case at that juncture was adjourned to 12 November 2012 for ruling, and the court ordered that the accused person be remanded. 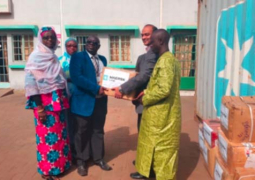