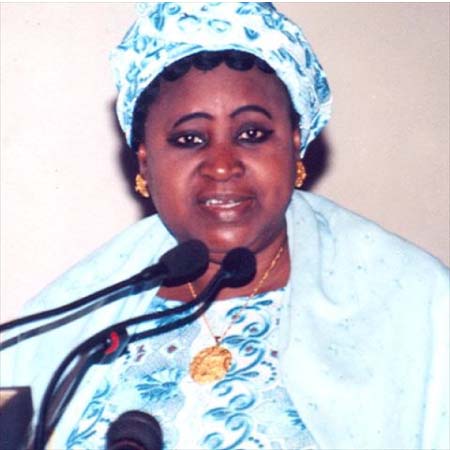 The Gambia Armed Forces on Friday held a farewell ceremony for Gamcoy 17 at the July 22nd Square in Banjul.

The contingent, which consists of 208 security members including 9 officers and 199 other ranks under the command of Lieutenant Colonel Baboucarr Sanyang, is bound for the troubled region of Darfur.

Graced by top government officials, family members and well-wishers, the ceremony was meant to remind them of their duties while in Darfur and to wish them well.

Speaking on the occasion, the Vice President and Minister for Women Affairs, Dr Aja Isatou Njie-Saidy, said the Government would continue to endorse and support the efforts of peacekeeping and stability for the continent as enshrined in the charter and principles of the African Union.

“I would like all of us to reflect on the price our gallant forces in Africa pay to stabilize the hotspots of conflict,” said VP Njie Saidy, adding that the global initiative and in particular the AU commitment to continental peace was a critical aspect of peace and security in Africa.

On a daily basis, Africa is submerged in a major crisis of political and economic instability marked by ethnic and religious conflicts, as well as political and social upheavals, VP Njie-Saidy stated.

She said the task of the officers and soldiers of the peacekeeping mission is to deliver effectively with a high sense of discipline and commitment.

She urged them to keep in mind the good image of The Gambia in the international arena.

“As I always remind you in many occasions, loyalty to country and patriotism are key ingredients to an effective peace and security apparatus,” she said.

She further said that Africa’s solidarity is a major aspect of her governments’ foreign policy and they would like to pursue all initiatives to minimize conflict in the continent but to achieve this noble objective of peace and stability the armed forces in Africa must take up a proactive role in managing and preventing disastrous conflicts that displace the people and propagate fear, poverty and social dissension.

“Armed and sister security forces, as you leave behind your families, friends and colleagues, I will advise you to put the interest of your country at heart. Do not betray your loyalty by engaging in any malpractice that will break the rules of ethics,” the Vice President concluded.

The Chief of Defence Staff, Lieutenant General, Ousman Bargie, said the deployment of GAF is a clear demonstration of the Gambia Governments willingness and commitment to nurture and maintain peace not only in the Gambia but the world over.

He said the primary role of armed forces is undoubtedly to defend territorial integrity, adding that in light of many trouble spots across the world, the armed forces are being called upon to either participate in peace building, peacemaking, or peace enforcement.

CDS Bargie added that in these entire peacekeeping missions, the GAF had participated in one way or the other in the woodland of Burma, to the mountainous region of Nepal to the forest region of Congo, Burundi to Angola, to the sand storms of Darfur, Chad to the rainy region of Liberia among others.

He said the contingent consists of 208 of all ranks including 9 officers and 199 other ranks under the command of Lieutenant Colonel Baboucarr Sanyang.

The contingent underwent 3 months of peace support operation training at the Gambia Armed Forces Training School, trained by their instructors, he said.

He said other aspects of their mission is the protection of civilian populations from all forms of violence  and more importantly they are required to give hope to the hopeless and restore confidence and human dignity in the communities.

“It is a mission which is demanding and full of challenges which are likely to increase development in the near future,” said CDS Bargie.

The GAF boss further said that it was prudent to mention that their troops are now going to be deployed for the first-time in Darfur for one year, advising them to work hard to win the hearts and minds of their fellow peacekeepers, as well as, the civilian population.