Dodou Loum, executive director of the Gambia Association of the Deaf and Hard of Hearing (GADHOH), has, on behalf of the association, heartily commended Goods for Gambia for restoring the association’s borehole water supply system.

Speaking to reporters on Thursday at GADHOH headquarters in Kanifing, Mr Loum expressed gratitude to the Holland-based charity organisation for successfully undertaking the repair work which cost D45,000.

He expressed optimism that the partnership between GADHOH and Goods for Gambia will continue to grow from strength to strength towards the full realisation of the human rights of the deaf and hard of hearing in The Gambia.

Loum said the partnership between the two organisations started when some GADHOH members met the Dutch couple, Mr Allen Johnson and Ms Renetta, who work for Goods for Gambia.

The couple developed interest in helping the deaf association after a brief conversation about the association’s vision and mission and strategies as well as the challenges it is faced with.

Morr Touray, the Gambian chairman of Goods for Gambia, said they first supported the association with a set of jersey.

They have also supported Serrekunda Hospital with 20 computers among other valuable items last month.

Mr Touray said the charity had supported the University of The Gambia, Sukuta Primary School, Brikama Primary School and other institutions and Gambians in need.

He said Goods for Gambia is committed to continue supporting GADHOH and the entire Gambian population. 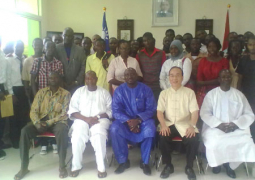