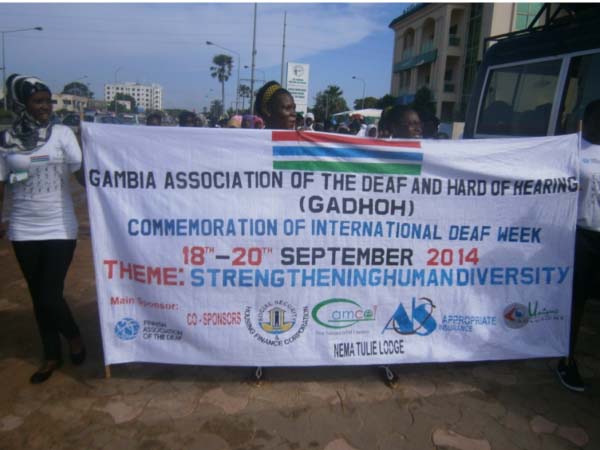 The association made the called during the annual celebration of the International Week of the Deaf, held yesterday at its headquarters in Kanifing.

Seventy million deaf people celebrated International Deaf Week worldwide with the recognition of UN, which is an occasion to draw attention to deaf issues, disseminate information on deafness and promote their rights and full participation in society.

This year’s commemoration was held under the theme: “Strengthening Human Diversity,” and begun with a match past from the Traffic Lights to the GADHOH head office in Kanifing led by the Gambia police band.

In his speech, GADHOH executive director Dodou Loum said though deaf people form a minority in The Gambia, they are part of the society and contribute immensely in the socio-economic development of the nation.

The association’s president, Abdoukadir Drammeh, said the celebration encourages deaf people, and is used to promote the rights of the deaf and dumb as citizens.

Alhaji Malick Jones of the Ministry of Information and Communication Infrastructure informed the gathering that the association paid a courtesy call on the ministry, and asked for the ministry’s support to have sign language introduced on the national television.

Jones assured GADHOH that his ministry wants to meet their rights, and that their request has reached the management of GRTS.

Seedy Njie, nominated National Assembly member on behalf of the Speaker, said as people’s representatives (both able and disabled persons) they shall stand by government to eliminate all forms discrimination that affect deaf people.

Njie said the National Assembly within relevant committees will continue to protect the rights of the people with disability, including their right to quality education and appropriate skills.