Gambian-born Fatou Bensouda has emerged as the consensus candidate for the high-profile job of chief prosecutor of the International Criminal Court, a diplomat at the center of the selection process said on Wednesday.

Bensouda, 50, is deputy to the current chief prosecutor, Luis Moreno-Ocampo of Argentina, whose term ends next year.

An informal meeting of ICC members was held in New York yesterday to discuss the appointment, said Liechtenstein’s U.N. Ambassador Christian Wenaweser, president of the Assembly of States Parties (ASP) to the Rome Statute that set up the court.

“I will recommend to the meeting that, based on my consultations, we go forward with a single candidate, Fatou Bensouda,” Wenaweser told Reuters by telephone.

The appointment will be made at a formal session of the 118-nation ASP in New York on December 12, Wenaweser said.

Bensouda was named deputy prosecutor of the Hague-based ICC in 2004, and previously worked as a legal adviser and trial attorney at the International Criminal Tribunal for Rwanda in Arusha, Tanzania.

She has long been regarded as the favorite to take over from Moreno-Ocampo, particularly at a time when the ICC’s cases are largely focused on Africa.

She was one of four candidates short-listed by a search committee last month to replace Moreno-Ocampo as chief prosecutor of the world’s top war crimes court.

Wenaweser told an ASP working group last week there was a “pervasive sentiment” among ICC members that the next chief prosecutor should be an African, and that Cayley and Petit had been told they were no longer being considered.

A U.N. diplomat who asked not to be identified said he understood Othman had subsequently withdrawn his candidacy.

The tough-talking Moreno-Ocampo has won praise for his role in promoting the work of the ICC. He has launched seven formal investigations, issued an arrest warrant for Sudan’s president Omar al-Bashir and begun three trials.

The ICC earlier this year indicted then Libyan leader Muammar Gaddafi -- since killed -- as well as his son Saif al-Islam and intelligence chief Abdullah al-Senussi. Moreno-Ocampo said last week, however, that he would not demand that the captured Saif al-Islam be handed over to The Hague.

In the latest development involving the ICC, former Ivory Coast president Laurent Gbagbo was flown on Tuesday night to The Hague to face charges of crimes against humanity.

Some African politicians have accused Moreno-Ocampo of pursuing only Africans. He has also been criticized over the ICC’s slow progress and for failing to bring a larger number of senior government officials to trial for various atrocities.

Bensouda was elected Deputy Prosecutor of the International Criminal Court by the Assembly of States Parties on 8th September 2004 and since then has headed and overseen the Prosecution Division of  the Office of the Prosecutor.

Prior to her election, Bensouda served as Senior Legal Advisor and Head of the Legal Advisory Unit at the International Criminal Tribunal for Rwanda.

Between 1987 and 2000, she was successively Senior State Counsel, Principal State Counsel, Deputy Director of Public Prosecutions, Solicitor General and Legal Secretary of the Republic of The Gambia, then Attorney General and Minister of Justice, in which capacity she served as Chief Legal Advisor to President Yahya Jammeh and his Cabinet. 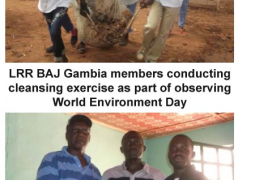 Plastic waste a cause for concern