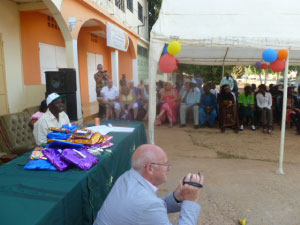 Friends of The Gambia Association (FOTGA) on Sunday held its annual general meeting (AGM) for the members of their parents-teachers association.

The meeting, held at their office in Kotu, was also attended by their members from the .

Speaking on the occasion, Yaya Camara, country director, told the gathering that Fotga is 21 years old this year since they started working with The Gambia.

He further revealed that they are sponsoring over 300 students at all grades including the .

He revealed that they do not only sponsor students in schools, but also involve in small and sustainable projects by building schools, health centres and other structures.

Camara said the whole idea was to uplift the poor from one level to another and the idea of the PTA meeting is to sensitize parents and students about the importance of education.

For her part, Kate Phillips, a member of Fotga in the , told this reporter she was highly impressed taking part in helping students from different parts of the country that are from less privileged families and are in need of help.

Madam Phillip also revealed that they started helping young Gambians many years ago, which they did not regret investing their money on them.

“The students are so determined and promising,” she said, adding that she believes if they really continue with their hard work, they will surely achieve their goal.

She further urged the parents of the beneficiaries to encourage their children to learn and ensure that any money invested in their children’s education is fully utilised.

Mr Darboe, Headmaster of Gidda Lower Basic School, expressed gratitude to members of Fotga for supporting students in the country.

He advised the parents to make good use of the opportunity provided them.

At the end of the gathering, certificates of appreciations were given to various students for their hard work at school as well as to encourage them to redouble their efforts.