Forum on intellectual property law and practice wraps up

The forum on intellectual property law and practice organised by the African Intellectual Property Organization (ARIPO), in collaboration with the Government of The Gambia through the Ministry of Justice, ended recently at the Sheraton Resort in Brufut village.

Speaking at the second segment of the forum, the Hon. Minister of Tourism and Culture, Fatou Mass Jobe, said the forum was very important and timely focusing on the protection of traditional knowledge, genetic resources and expressions of folklore.

She said the seminar was also timely because The Gambia is at the threshold of ratifying the Swakupmond Protocol on traditional knowledge and folklore.

She said that in 2003, the government repealed the obsolete 1916 copyright act in ordinance with a new copyright act.

The act provides for copyright office under the National Centre for Arts Culture (NCAC) charged with registration of intellectual property works such as films, books, and music products, fighting piracy and sensitizing the public on copyright issues, she said.

She said that in May 2013, the copyright office succeeded in calling up the constituent congress of the collecting society.

The NCAC raised the funds for the drafting of the constitution, and the congress oversaw the voting process, she said.

She added that the copyright office had facilitated the use of a spear room at the Gambia Tourism and Hospitality Institute for use by the society’s board as a temporary office equipped with materials donated by ECOWAS.

The Director General of ARIPO, Dr Fernando Dos Santos, expressed ARIPO’s gratitude to the Gambia government through the Ministry of Justice for accepting to host the roving seminar.

In 1991, The Gambia hosted the diplomatic conference, which approved the protocol on trademarks, known as the Banjul Protocol, he said.

The initiative was conceived during their tour in the different member states of ARIPO, he said, adding that they have realised their entrepreneurs, researchers and artists are incredibly creative, impressively innovative and yet the full benefit of those tireless efforts had not been realised and rewarded adequately.

This prevailing situation, he noted, was due to lack of awareness on the important role IP plays in recognizing and harnessing human creations for the social, cultural, economic and technological development. 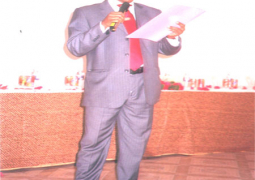 Praying for a New Year of peace and prosperity