Former Secretary General and Head of the Civil Service, Dr Njogu Bah, has finally been released from custody on Tuesday evening, reliable sources have told The Point.

Bah, who was arrested on 10th June and held since then, was jointly charged alongside ex-Justice minister Lamin Jobarteh and former Solicitor General and Legal Secretary Pa Harry Jammeh, at the Banjul Magistrates’ Court before senior Magistrate Lamin Mbai.

He was first arraigned on 15th July, when presiding Magistrate Mbai granted him, Jobarteh and Pa Harry Jammeh bail of D100, 000 each with one Gambian surety, who must deposit a biometric identification card.

The bail condition further stipulated that the accused persons should report to a police station from Monday to Friday, and they must also surrender their passports to the registrar of the Banjul Magistrates Court.

During his second appearance in court on Tuesday 30th July, senior Magistrate Mbai told the court that the court strongly advised the office of the National Intelligence Agency to comply with the order of the court, and allow the accused to proceed with his bail, unless when new charges were levied against him.

However, the magistrate went on, it was important to note that the office of the National Intelligence Agency (NIA) have the power to hold the accused, if they feel that investigations are still ongoing.

Njogu Bah is among others accused of conspiring with former Justice minister Lamin Jobarteh and former solicitor general and legal secretary, Pa Harry Jammeh to forcefully terminated the services of Justice Joseph Wowo and sent him out of the country, which decision was prejudicial to the rights of Justice Joseph Wowo, and thereby committed an offence. 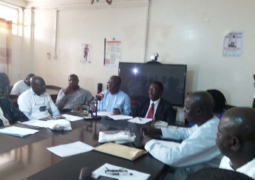