The former Permanent Secretary at the then Department of State for Religious Affairs, Mr. Alasana S.T Jammeh, has again been re-charged with the same charge of giving false information to a public officer.

Mr. Jammeh, who was recently discharged by Magistrate Danso of the Banjul Magistrates' Court for non-compliance with the court's order, once again denied the charge before Principal Magistrate Emmanuel Nkea.

Mr. Jammeh is alleged to have sometime in the year 2008, by virtue of his appointment as Permanent Secretary responsible for Religious Affairs, informed the Hajj Panel Commission that he had received directives from the Office of the President, to select Inter-continental Airways to transport pilgrims during the 2008 Hajj period, knowing the said information to be false.

Shortly after the charge sheet was read, the Prosecutor applied for an adjournment on the grounds that he wanted the court to subpoena the prosecution's witnesses to appear in court.

At that juncture, Defense Counsel Lamin Jobarteh, raised an objection that the issue of subpoena is premature, arguing that there was nothing before the court to show that

witnesses have been summoned, and that they have refused to come to court.

He told the court that an earlier charge sheet, dated 2nd April 2009, had been thrown out and the accused person discharged for non-compliance with the court's order.

He added that the order was for the State to furnish the court with the name(s) of the person(s) to whom the purported false information was given to.

Lawyer Jobarteh argued that considering the present charge sheet, which has the same words with the preceding one, the court has no jurisdiction to hear the case.

"For this court to do so, would amount to an abuse of process  (double jeopardy)," he argued.

The case was adjourned to Thursday 1st of October 2009. 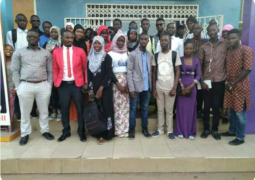