The murder case involving Edrissa Jarju and Edrissa Jaiteh, former officers of the National Drug Enforcement Agency, NDEA, yesterday continued at the Special Criminal Court with the testimony of a witness.

Sub-inspector Bubacarr Korta of the NDEA told the court that on 16 December 2011, while he was at home, he received a phone call from the 1st accused, Edrissa Jarju.

The witness added that he asked Jarju why he did not inform him earlier, as it was a serious issue and he then told Jarju that they should prepare their mind in case of anything.

Sub-inspector Korta further adduced that he called one Marr, a CID officer, and asked him about the alleged arrest and torture of the victim.

Marr told him that, as he was speaking to him, they have a dead body over the counter, adding that the following morning, he went with his OC to the station where he found the vehicle of the NDEA about to be burnt and stones were scattered all over the station premises.

The witness added that he was part of the panel which investigated the alleged murder case, as a result of which he gave a statement.

The case was adjourned to 13 August 2012, for cross examination. 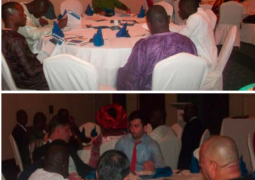