Another trial involving three former senior officers of the National Drug Enforcement Agency (NDEA) continued yesterday at the Banjul Magistrates’ Court, with the testimony of the fourth prosecution witness.

Lamin Gassama of the NDEA attached to the agency’s Holgam intelligence unit, told the court that he recognized the accused persons, as they were former NDEA officers.

Gassama told the court that, in September 2010, he was instructed to caution the first accused person, Ibrahim Bun Sanneh.

Asked what was the nature of the investigation in the matter, Gassama said that an exhibit (cocaine) was alleged to have been destroyed without a court order.

He said he obtained the cautionary statement from Bun Sanneh in the presence of an independent witness, by reading the cautionary wordings to the accused person.

“The independent witness and the accused persons signed, and I later put the statement in the file,” added Gassama.

The document identified by the witness was tendered and admitted as an exhibit.

He said they did the investigation, and compiled a report.

Under cross-examination by defence counsel Kebba Sanyang, the witness was asked: “Do you know whether the accused made a voluntary statement in respect of this case?” “No, I don’t think so,” replied the witness.

Counsel further asked the witness whether the first accused was charged with an offence, at the time of obtaining the cautionary statement.

The deputy Director of Public Prosecution, S.H Bakoum, objected to this question.

However, counsel said cautionary and voluntary statements can only be obtained from an accused person that was charged with an offence.

Meanwhile, Gassama told the court that the first accused was cautioned in connection with the destruction of the exhibit (cocaine).

He was then asked by counsel to look at the exhibit (cautionary statement) of the 1st accused person, and show the court where it was written in the body of the statement  that  the first accused was cautioned in respect of destruction of an exhibit.

Bakoum again objected on the grounds that the witness cannot give oral evidence on documents that are already before the court.

Sanyang argued that the question was relevant, following the answer given by the witness to the previous question.

He added that the purpose of cross-examination was to test the veracity of the witness.

Bakoum’s objection was overruled, and Gassama went on to respond in the negative.

Responding to another question by counsel, the narcotics agent said at the time Bun Sanneh was the NDEA executive director.

Asked whether as executive director of NDEA, his functions included handling drug exhibits, the witness said as the “CEO is responsible for everything, as far as the agency is concerned”. 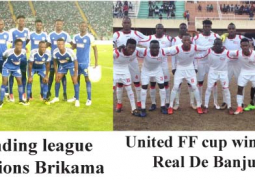