Modou Touray, the former Managing Director of Gunjur Janneh Koto Radio Station was recently convicted and sentenced by the Brikama Magistrates' Court, presided over by magistrate J.A. Effim to a fine of D10, 000, in default to serve one year in prison.

The court also ordered him to pay a compensation of D319, 400 to Gunjur Janneh Koto Radio FM, in default to serve another three years in prison.

Modou Touray was convicted and sentenced following his own plea of guilty to the offence of making documents without authority and stealing by director or officer.

According to the facts as narrated by the police prosecutor, ASP Trawally, the convict was employed by the Gunjur Janneh Koto Radio FM as a Managing Director.

ASP Tarawally further narrated that Gunjur Janneh Koto Radio FM was owned by one Seedy Ali Janneh, a Gambian residing in . He narrated that the said radio FM was registered as a charitable organisation.

At that juncture, ASP Trawally applied to tender the registration form of the said radio FM as an exhibit and his application was granted and the court admitted the document and marked as exhibit without any objection from the convict.

The prosecutor further told the court that in May 2008, the convict was employed as a Managing Director of the said radio FM. He adduced that in 2009, the convict voluntarily and unceremoniously resigned and went at large.

He said during the absence of the convict, it was revealed that the convict had changed the registries of the said radio FM to his name as the proprietor.

ASP Trawally again tendered the certificate of the said station, bearing the name of the convict as an exhibit.

As the Managing Director of the Gunjur Janneh Koto Radio FM, the company open a saving account at the Standard Chartered Bank and at the Access Bank, and the convict was instructed to save the daily earning of the company into those two accounts.

Still narrating the facts, ASP Trawally told the court that two months after the convict's function as the Managing Director of the said radio FM, he secretly opened another saving account at FIB Bank, Brikama branch under the name of the Gunjur Janneh Koto radio FM.

According to ASP Trawally, the secret account was unkown to the company and the convict has been posting daily earning of the company into that account to the tune of D486, 000.

On 26th April 2010 in Brikama, he added, the convict was arrested by the police. He said the police then sent a request to the FIB Bank for information in the account No; 03.101-41649-01 and the FIB Bank provided the police with the print out of the said account number.

The print out of the said account number from FIB was also tendered in court, as exhibit without any objection by the convict.

ASP Trawally narrated that at the police station, the convict confessed in the presence of an independent witness and he again applied to tender the cautionary and the voluntary statements of the convict as an exhibit.

The convict admitted the facts as narrated by the prosecutor as true and correct and then begged the court to temper justice with mercy on him. He told the court that he is married with children and that he is the breadwinner of his family.

All sentences were to run concurrently. 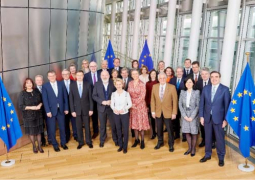 Africa and the European Union: A partnership for the future