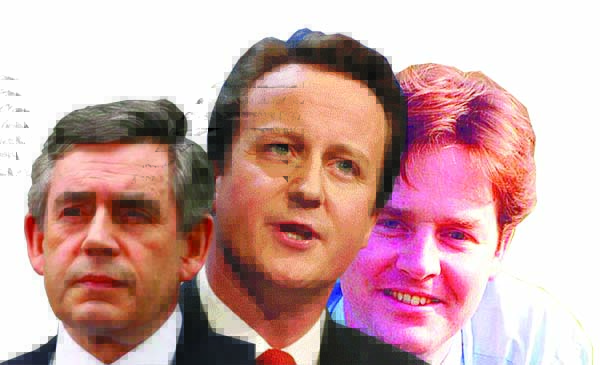 In the , polls and predictions about general elections are highly regarded, as independent opinion surveys of voters rigorously conducted prior to such elections taking place.

This time around, more regular polls took place and special attention was dedicated to them, as surprises are expected in the outcome of the results. Thus, this correspondent will take a close look at such polls and predictions.

For instance, one of the most respected opinion makers - ComRes poll for ITV - came out with a slight change from its previous poll announced earlier.

It thereby further confirmed that the outcome of this year's general election remains an 'unknown', and could yield 'unexpected' results. This makes the general elections even more exciting.

In its latest poll, the top-line figures with changes from its previous one revealed that the Conservatives under David Cameron are expected to gain 37 percent, Labour under current Prime Minister Gordon Brown at 29 percent, and Nick Clegg's Liberal Democrats with 26 percent.

The Liberals' performance has shocked the nation, with the unprecedented support, and cannot be ruled out, in any circumstances, especially with the polls further suggesting that support for the Liberals may change further with 'higher point' registered by them.

One cannot help, therefore, but ask whether the results are definitely unpredictable.

According to another respected medium, the Guardian Newspaper, the Tories are still ahead with 37 percent, which remains unchanged as confirmed by a Guardian/ICM poll carried out last week.

The same ICM poll of last week gave the ruling Labour party 31 percent, which is down two points on the last Guardian poll. However, it is also up one point on the more recent survey conducted.

Now, even though the polls are saying that the Tories are gaining ground, the marginal seats are yet to be determined. This news is a source of frustration for all parties, and not even the opinion-makers can predict what will happen to those marginal seats.

During the past few days alone, thousands of phone calls were made around the country asking eligible voters what to expect. This correspondent alone received five calls from different opinion surveys, asking questions about the election.

It has been revealed to The Point, for instance, that ComRes telephoned a random sample of over one thousand British adults, during the first days of May.

Some polls are suggesting that the Liberal Democrats are now at 20 percent, which is one point lower than in the last two polls conducted by ICM.

It is also interesting to note that support for other smaller parties could reach 11%, and this includes the nationalist parties with 4%. The United Kingdom Independent Party (UKIP) has 3% and the Green party 2%.

Until last evening, many of the voters were expecting Cameron to win the election, but with a slim majority. One such voter who spoke to The Point a few hours ago said: "There is no doubt that the Tories will win for the simple fact that in Britain people don't like a government to stay after a second term in office, despite its effort and good job."

Whether that is true or not, 63% of adults questioned agree with the suggestion that it is 'time for change' against only 36%, who agree that 'continuity' of the current government's work is important, and must not be derailed.

Meanwhile, the ruling Labour party announced that Labour supporters who are not happy with the party's performance could also vote 'tactically in constituencies where the main battle is between the Liberal Democrats and the Conservatives'.

It is an open secret that Labour prefers the Liberals to win those seats, in order to 'stop the Conservatives' from winning a majority.

However, the Tories are crying foul following such an announcement, and are calling on voters to give them a full mandate. This prompted the Tory leader, David Cameron, to call Labour 'desperate', and further pleading with voters to "please give us the tools to help us change the country."

However, senior Labour Cabinet Minister, Peter Hain, also added his voice to the debate, and asked voters to 'vote with their heads, not their hearts to stop David Cameron becoming Prime Minister in Thursday's election'.

Other government Ministers are also asking voters to vote the Liberals in such areas, if need be, to 'keep the Tories out'.

However, former Prime Minister, Tony Blair, who joined the campaign trail a few days ago, disagrees and called on all Labour supporters to vote Labour - ‘The party they believe in and keep it in power.

Interestingly, while some are emotionally pleading with Blair to help continue his canvassing for votes, others are calling on the former Prime Minister to stay away from the Labour campaign.

Despite the polls in its favour, said that the Tories are not taking anything for granted, while Labour insisted that they will fight for each vote until the end.

Whatever the case, after months of argument, debate, discussion, spin and speculation, the outcome of this very important and highly unpredictable election will be known today.