Money laundering has become more prominent in the political, economic, and legal debate. Money laundering refers to the act of processing or investing "dirty money" using the channel of legitimate financial institutions or business ventures to make that money "clean".

At some point in the process there must be a switch between the two; necessarily the art is to keep that switch hidden.Various laundering techniques can be employed by individuals, groups, officials and corporations.

The goal of a money laundering operation is usually to hide either the source or the destination of money.

Large-scale money laundering schemes invariably contain cross-border elements. Since it is an international problem, international co-operation is a critical necessity in the fight against it.

Money laundering is ipso facto illegal; the acts generating the money almost always are themselves criminal in some way (for if not, the money would not need to be laundered).

As for the potential negative macroeconomic consequences of unchecked money laundering, one can cite incomprehensible changes in money demand, prudential risks to bank soundness, contamination effects on legal financial transactions, and increased volatility of international capital flows and exchange rates due to unanticipated cross-border asset transfers.

Also, as it rewards corruption and crime, successful money laundering damages the integrity of the entire society and undermines democracy and the rule of the law.

Some might argue that developing economies cannot afford to be too selective about the sources of capital they attract. But postponing action is dangerous. The more it is deferred, the more entrenched organised crime can become.

As with the damaged integrity of an individual financial institution, there is a dampening effect on foreign direct investment when a country’s commercial and financial sectors are perceived to be subject to the control and influence of organised crime.

Fighting money laundering and terrorist financing is, therefore, a part of creating a business friendly environment which is a precondition for lasting economic development.

Money laundering can bring about illegal arms sales, smuggling, and the activities of organised crime including, for example, drug trafficking and prostitution rings, which can generate huge amounts of proceeds.

"We have probably the strictest standards on earth in terms of compliance with anti-money-laundering measures."

Gamcel FC, others progress to Semis in Gunjur Nawetan 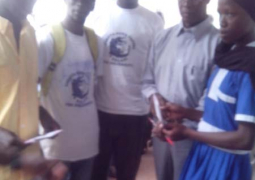