They are being tried on charges of conspiracy, threatening violence, criminal trespass, common assaults and assault, charges they have denied.

Janneh stated in his testimony that Berending village and Gunjur village are all in Kombo South, adding that he was aware that there was a land dispute between the Jammeh Kunda family and Sanyang Kunda family in Gunjur.

He said the two families went to the district tribunal and the matter was decided, and it was later appealed at the high court.

The witness identified the judgment documents from both the high court and the Supreme Court, which were later tendered as defence exhibits.

According to him, the judgment from the high court and the Supreme Court were all in favour of the Jammeh Kunda family, the accused persons’ family.

He said he also knew the land in dispute, adding that the people from Berending village lodged several complaints to him about the said land in dispute.

According to Janneh, he wrote a letter and dedicated copies to the district tribunal and the alkalo of Berending stating that he could not give land that does not belong to him.

The two letters were also tendered, and admitted as defence exhibits.

Janneh further adduced that he could remember when the people of Jammeh kunda lodged a complaint to him that there was big noise in their land, and they were going to report the matter to the Gunjur Police Station, which they did.

He said on their arrival at the police station, they met the former IGP, Ensa Badjie, who called him and told him to come into the station.

Janneh further stated that he went with his district authorities, and Ensa Badjie told him that he wanted to see what was happening in Berending.

He said at the Brikama Police Station, one Jerreh Demba gave him the report. 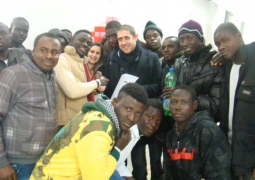