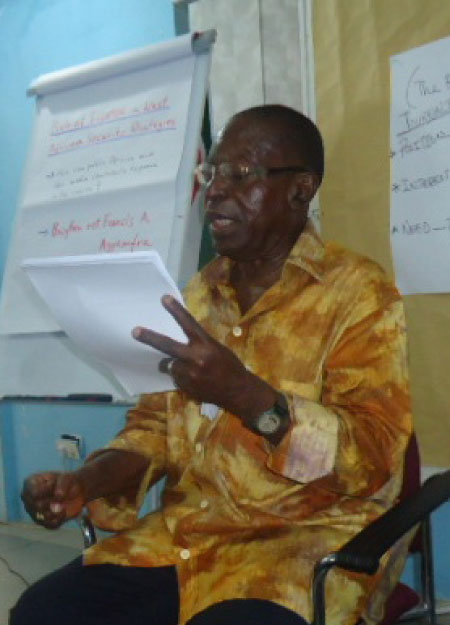 A veteran West African security expert and former Ghanaian defence minister recently addressed participants of the 2012 International Institute for Journalism (GIZ- German cooperation) training course underway in Accra, Ghana, on the situation of peace and security in the sub-region.

Citing neighbouring Senegal as a case in point, Brigadier-General (rtd) Francis Asiedu Agyemfra said: “It is also worth mentioning that currently, President Wade of Senegal is desperately battling for a third term of office, despite the fact that the Senegalese Constitution allows only two terms for a President, a situation which could lead to instability in a country once the beacon of stability in West Africa.”

Brigadier General A. Agyemfra was presenting a paper on: “The Role of ECOMOG in West African Security Strategies - how can public opinion and the media contribute to peace in the Region”.

The paper was delivered at the two-week international media training course on ‘The Media’s Role in Conflict Transformation and Peace-building in West Africa”, currently underway in Accra.

“When it comes to coup d’états, or unconstitutional changes of government, West Africa also has an unfortunate leadership position in Africa.  In fact, since 1963, when the first bloody overthrow of a government in West Africa took place in Togo, during which the first President, Sylvanus Olympio, was murdered, West Africa has indeed borne the unenviable reputation as leader, as regards the number and frequency of unconstitutional overthrow of government in Africa.”

“The aim of this presentation, therefore, is to examine the security mechanism that has been created by ECOWAS to deal with embryonic and ongoing conflicts in the sub-region, and the role that public opinion and the media can contribute to peace in the sub-region,” he said.

Brig. Gen Agyemfra who played a key role in the creation and formation of ECOMOG (the Economic Community of West Africa States’ Cease-fire Monitoring Group) further told journalists: “In the promotion of regional integration and peace, which is a prerequisite for regional cooperation, the media and public opinion have a vital role to play.”

“The Media should, therefore, position itself and focus on issues of regional integration and development by pursuing regional cohesion, through news packaging and dissemination so as to help solve the numerous conflicts in the region.

“Our newspapers, television and other broadcasts stations, information services must reach the ECOWAS citizenry - the workers, farmers, trade unions, university students, the young and old -to explain to them the aims and objectives of ECOWAS.

“Indeed, the media has a responsibility to explain to the masses the meaning and purpose, as well as the necessity for, and benefits of regional economic cooperation and integration, and the need for peace and stability in the region to ensure the attainment of these objectives.”

Dilating on how the media and public opinion contribute to regional integration and peace, Brig. Gen. A. Agyemfra said, “journalists must themselves attain a proper understanding of the aims and objectives of ECOWAS and the African Union. They must also acquaint themselves with ECOWAS treaties and protocols, particularly the protocol relating to the mechanism for conflict prevention, management, resolution, peace-keeping and security, as well as the protocol on democracy and good governance.”

“This is the kind of education which the West African media and journalists are expected to help spread,”  Agyemfra who serve as Ghana’s ambassador to both Sierra Leone and Liberian further told West African journalists.

He believes that “accurate reporting of all shades of opinion is vital to enhancing public information and peace”.

“As for the private press, the least said about them the better. The stories of most of them are characterized by sensationalism, falsehood and inaccuracies deliberately designed to assassinate the reputation of political opponents. Some even beat war drums, while others cry wolf when there is none.”

A former deputy defence attaché at the Ghanaian embassy in U.K. and now security consultant and UN mediation expert said “journalists, by their calling, have the responsibility to spearhead the crusade for sub-regional economic cooperation and integration, peace and security, the single means by which the prosperity of the sub-region can be promoted.”

He said “by reason of your profession, you men and women of the press, are in the most vital of positions where you can persuade the minds of the people, inform their opinions and point the way to go”.

He caution: “Unless you use your profession for good, you betray your calling, and you mislead those who look up to you for truth, and who expect from you the interpretation of that truth in their cause.”

“It is against this background that there must be unending vigilance on your part against tyranny, oppression and nepotism, as well as corruption and all forms of anti-democratic practices and, above all, unswerving loyalty to principles approved by the masses of the people”.

He is currently a security consultant and a senior visiting fellow at the Institute of Economic Affairs (Ghana) and has authored a book entitled, “Armed Robbery: What to do to protect yourself”.

Meanwhile, the training course started on Monday 19th March 2012, witnessed by the GIZ-Ghana Country Director, Mr. Siegfried Cleffler, Bright Blewu, an official of the Ghana international Press Center, as well as Madam Ursula Walter-Okine, in charge of the media training at  GIZ.

Both spoke briefly at the opening ceremony on Tuesday at the Ghana International Press Center in Accra.

Dignitaries reminded West African journalists of the crucial role they can play in attainment of peace and security in the region.

They also underscored the importance of conflict transformation and peace-building, which they said cannot be overstated.