The Department of Forestry, in collaboration with partners in the tourism sector, recently embarked on a tree planting exercise at the Bijilo Forest Ecotourism National Park.

During the exercise, one thousand seedlings were planted courtesy of the British High Commission in The Gambia.

Upon receiving the donation of seedlings from the British High Commissioner, he explained, the department felt it was very necessary to transplant them at the Bijilo Forest Ecotourism National Park, measuring sixty hectares, which is under the management of the department of forestry.

According to him, the aim of the exercise was to enrich the areas with diversified species of trees including a tree locally called Jalo.

He commended the Gambia National Tourism Board, bird watchers, tourism security guards, tourism taxi drivers, as well as other security units for helping in planting one thousand seedlings within three hours.

“We need the participation of all stakeholders in restoring our forest cover, which should be everybody’s concern,” he said.

He also described the Bijilo Forest ecotourism as very important as it is located within the tourism development area.

He noted that the park is a source of tourist attraction, as most of the visitors who come to The Gambia visit the park, which beefs up the economy of the country.

The park, he noted, is very important for the local economy as it creates revenue for the state by generating funds through entry fee, as well as creating employment, for the department.

According to Mr Gaye, the weather in the park is usually very cool and easily attracts eco-tourists.

Commenting on sustainability, Mr Gaye said the department of forestry has no fears at the site as there are no forest intruders loitering within the area, whilst incidents of bush fires are very unlikely.

He then commended the British High Commissioner to The Gambia, David Morley, for donating the seedlings, stressing that it would be of great importance to the country.

According to Mr Gaye, every year the annual target of tree planting for the department of forestry is one million trees.

To achieve this goal, he said, the department of forestry is partnering with various stakeholders and institutions in planting more trees nationwide. 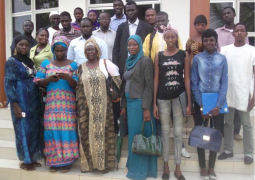