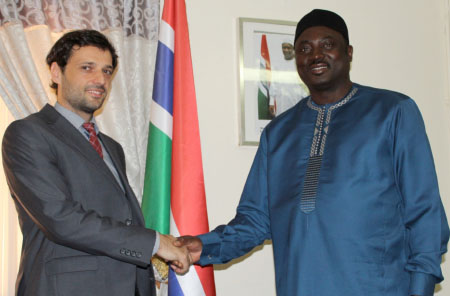 On 27 December, the Honourable Minister of Foreign Affairs, International Cooperation and Gambians Abroad, Dr. Mamadou Tangara, bade farewell in his office in Banjul to the outgoing Deputy Head of Mission of the Federal Republic of Germany to The Gambia, Thomas Wixver.

The farewell came on the heels of the end of his two-year tour of duty. The Minister and the Deputy Head of Mission discussed progress in the bilateral relationship between The Gambia and Germany over the past three years. Dr. Tangara stressed that Germany is one of the most important partners of Gambia, noting that both countries enjoy long-standing historical and cultural ties.

The out-going Deputy Head of Mission recalled that the major achievements registered during his tour of duty was the securing of the stabilisation fund, the visit of the German President, H.E. Frank – Walter Steinmeier, to Gambia in December 2017 and the raising of the awareness of people in Germany about The Gambia.