The Forum for the Exchange of Ideas for Development (FOREID) at the weekend hosted lectureon “Democratic Transitions, Good Governance and the Rule of Law.

Speaking at the lecture, Prof Abdoulaye Saine,internationally renowned academic and activist, said such topical issues have been the focus of his scholarly work for many scholars for nearly thirty years or more.

He said it was a rich and varied literature in which The Gambia occupies a special place because of its unique status as one of four functional democracies in Africa until the 1994 coup that ushered in a deeply repressive polity.

In his lecture, he pointed out that Gambian living oversees have worked tirelessly to bring an end to the twenty-two-year tyranny that deeply traumatized Gambians and shook to the core Gambia’s social, political, economic and moral fabric.

It was a long and difficult road to the current political dispensation and Gambians need not be reminded of the uncertainty, instability and reign of terror that preceded it, he added.

“This meant that many Gambians overseas were rendered persona non grata in the country of their birth for years,” he said.

The theories of modernisation in political and economic development spearheaded mostly by American scholars, such as Almond and Powell, Samuel Huntington, Walt Rostow, among many others, sought to provide both theoretical and empirically based roadmaps by which the so-called emerging states could move from their relative “underdevelopment” to levels of political and economic stability similar to those of Europe and the USA.

He said many scholars also charged that political and economic development theories and strategies had also failed to liberate or emancipate the poor and may have contributed to deepening social and economic cleavages, political instability and growing political violence in the so-called “Third-World”.

The 1994 coup ended the rule of the longest serving functional democracy in Africa, he stated, sayingcivilian rule by the APRC with a subsequent referendum over the hastily drafted constitution in which term limit and other age requirements for the president were lowered or expunged paved the way for an APRC dictatorship that lasted twenty-two years.

Over the years, the political voices at home and Diaspora Gambians also joined the push for a coalition of all political parties that overthrew Jammeh after Gambia had suffered 22 years of dictatorship.

Social and other media attacks aided by the international press further isolated Jammeh and his regime, he divulged, adding that Gambians raised funds to support a slowly coalescing opposition led by Mr Adama Barrow.

The 2016 presidential election brought to a decisive end Jammeh’s twenty-two-year misrule and ushered in a new political dispensation that Gambians had hungered for.

Prof Saine added that in his many conversations during his six-week stay with Gambians across the political spectrum there was concern expressed over cabinet appointments and a sense of entitlement that appears to grip the new regime. 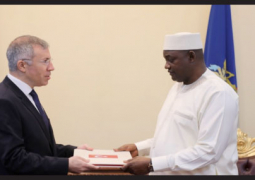 Suspect in court for Sarro conflagration 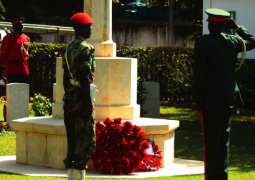