Fourteen-year-old Bubacarr Chatty, player of Gilkock , Brufut Branch and Steve Biko FC youth team, is in dire need of assistance to undergo for oversea treatment, according to his medical paper.

Chatty has been diagnosed to have severe pericardial rust which is an enlargement of the heart. According to the future star, he noticed some pain after training and rushed home where his mother advised him to visit the Brufut Health Centre.

In Brufut, he was only subjected to malaria test and was given a few medications to use.

He said he sat for a few days when he realised that it was not recuperating and had to visit the Medical Research Council.  After a series of tests was conducted on him, he was told that he has pericardial rust which shows that his heart is enlarging.

MRC then referred him to the Royal Victoria Teaching Hospital (RVTH) after noticing that there is an increment in the pericardial diffusion.

"I was very shock when I was told it is a heart disease. When I heard that, the first thing I thought of is my family, then I said to myself I will not be playing ball again. My mum was surely looking up to me. She spent a lot on me expecting that when I grow I will also spend on her, only to hear that I developed such a disease. It's a pity," the lad said.

He also spoke of his plans to become an Information Technology specialist, saying "my mum spent all she has in financing my computer networking course which I was also hoping to take as a career beside football. But as things are how can I achieve my aims? At this moment, I am only waiting on the RVTH doctors for their own recommendation on the issue. I have two appointments, but unfortunately for me, my first appointment I could not see the doctor. Again I have another appointment to see the same doctor on the 17th of this month. The doctor is the man who will determine if he can cure me or not. At this moment, I am just desperate because I want to be healthy to help my mum and younger brothers."

Fatou Jawara, mother to Bubacarr Chatty, said she cried when she learnt that her child has developed a heart problem.

"I wept seriously when I was told by the doctor at MRC that the only son I am relying on in terms of assistance has a heart disease. The reason why I wept is because I never heard of such diseases cured here in the country."

Madam Jawara, however, called on Gambians and even non-Gambians alike to come to her aid. As she put it, she has spent almost everything she has in the education of her sick child.

The Brufut based were very sad to hear the news. Speaking on behalf of the academy, Buba K Jallow, technical director of the academy, said the news of Bubacarr Chatty's aliment came to them as a shock.

He described the boy as hard working player who could make a name for himself in the world of football.

"Bubacarr Chatty is one of our very talented players whom we were expecting to make us proud, as well as his family.

We hope he has all the required assistance to fly him out of this country for treatment so that when he is healed, he could come back and continue his football, as well as his studies," Buba Jallow said.

Another coup in Africa! 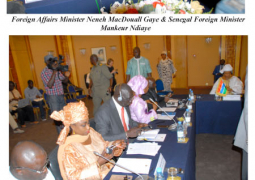