The department of forestry spearheaded by its director, in collaboration with various Foni Bondali youth associations for development and some students from the of , has responded swiftly to President Yahya Jammeh’s suggestion by planting over one thousand seedling of different varieties at the at the weekend.

This was in honour of the president’s advice, the chief of Bondali, Bakary Badjie, stated.

Speaking at the tree planting exercise, Chief Badjie expressed appreciation with the “immediate response” by the department of Forestry and the Foni Youth Association for Development, as well as other development partners, to honour the president’s call on them to beef up the Green initiative, which was less than fifteen days after the concern raised by the president.

“This shows that the department of Forestry and Foni Youth Association are committed to the sustainability of our environment,” chief Badjie said, adding that the planting of trees in was an instruction made by the president at a recent meeting held at Mayork during the president’s just concluded meet-the-people tour.

Chief Badjie used the occasion to commend the Foni youths and the department of Forestry for their loyalty to the Gambian leader and in honour of his suggestion, saying the exercise would go a long way in improving “the livelihood of our future generation”.

Also the National Assembly Member for Foni Bondali constituency, Hon. Matarr Kujabi, who also participated in the exercise, expressed delight to be associated with the exercise, saying “the aim is to sustain the School Green initiative for future generation.

He also urged the youth to continue to collaborate with the Forestry department in the restoration of the country’s forest cover.

For his part, the director of Forestry, Abdoulie Sanneh, applauded the youth for their participation in the exercise, saying: “The youth have taken ownership of their environment for the future generation.”

Director Sanneh used the occasion to challenge the youth to continue their trend in the planting of trees. “We are not doing it for the President but for ourselves,” he averred.

Mr Sanneh also thanked President Jammeh for his suggestion and foresight in making The Gambia ‘Green’.

He also thanked the principal of the school for his commitment in ensuring the trees are protected. 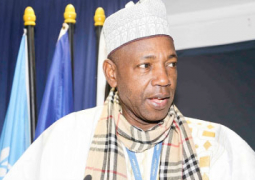