The Auditor General’s report has outlined a number of malpractices in the cashbook and alteration of payment vouchers amounting to D529,007.65 during the scrutiny of cashbooks and payment vouchers, at the Gambia’s embassy in Guinea Bissau.

This was revealed by the Auditor General, Karamba Touray, while presenting the government’s audited financial report before the joint committees’ session of lawmakers at the National Assembly in Banjul.

The permanent secretary at the Ministry Foreign Affairs, Njogu Saer Bah, appeared before the PAC/PEC of the National Assembly to explain the embezzlement that took place at the Gambia’s embassy in Guinea Bissau.

He told the PAC/PEC committee that the situation happened at a time Guinea Bissau was under transformation from its internal struggle.

PS Bah further informed the joint Assembly committee that the Gambia government was constructing a chancery in Bissau at the time, which he confirmed was now completed.

“The project is completed, but we still owe the contractor some money,” he said.

He further told the PAC/PEC that the Ministry has no monopoly over the appointment of financial controllers at the Gambia’s embassies in foreign countries, which he said made it difficult for tight supervision.

He added that measures had been put in place, as the head of mission in any embassy would make authorization of the daily financial transactions.

“We are not in control of those that control the finances at our embassies in foreign countries, and that is why they do not report back to us,” he further clarified.

The report outlined a number of malpractices in the cashbook and alteration of payment vouchers amounting to D529,007.65 during the scrutiny of cashbooks and payment vouchers.

It added that the malpractices were ultimately designed to defraud the embassy of its funds.

The financial controller, one Baba Gomez, was accused to have embezzled hundreds of thousands of dalasis and absconded.

“There is no evidence that the amount was recorded in the cashbook at all,” the report stated.

“The difficulty of tracing the amount was compounded by the fact that the Finance Attaché did not quote cheque numbers for bank payments and cash withdrawals in the cashbook.”

The report stated further that D112,462. 24 was withdrawn from the bank. However, these withdrawals, it added, were not posted in the cashbook, and as a result, it was not accounted for.

The speaker, Hon. Abdoulie Bojang, said the Assembly is deeply concerned about issues at the foreign level, describing some cases as unpleasant.

Hon. Fabakary Tombong Jatta, majority leader and the member for Serrekunda East, called for a valid structure such as checks-and-balances to avert such dubious acts.

He argued that such financial mismanagement had been happening for a long time, and he “wanted to know what the Ministry of Finance has learned from them.”

The NAM for Bakau Constituency, Hon. Kalifa Jammeh, suggested that properties of those culprits who have absconded be confiscated, while Hon. Muhammed Magassy of Basse urged the Ministry concerned to find ways of indicting them.

During the examination of payment vouchers, the report stated that it was observed that some payment vouchers were inflated, and that the original figures on the payment vouchers and supporting documents were altered and inflated to show higher figures than originally indicated, thus resulting in overstatement of the expenditures in the accounts. 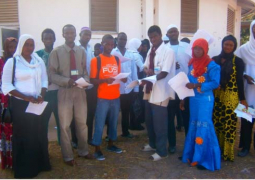