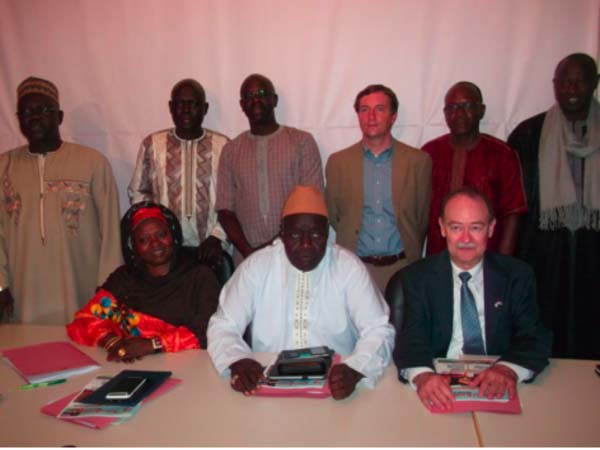 The US embassy in The Gambia is looking forward to continuing partnership, as well as assisting the American Chamber of Commerce (AmCham) to achieve its key objectives, according to the new US Charge d’ Affaires Joseph D. Stafford.

Mr Stafford was speaking at the annual general meeting (AGM) of AmCham held on Friday at the chamber’s office on Kairaba Avenue.

He expressed his delight over AmCham’s endeavour towards the development and promotion of business in The Gambia.

He added that the creation of the chamber four years ago indicated the desire of the Gambian business community and the Gambian people to improve businesses in the two countries, and to deepen lasting and meaningful relationships.

Speaking on the occasion, Amcham president Alhagie Abdoulie Touray (Baks) said AmCham focuses on the increment of the level of interaction between The Gambia and the United States of America.

He mentioned the various American franchises operating in The Gambia, such as Western Union, Coca-Cola, MoneyGram and Gam Petroleum, among others.

He mentioned the significance of the USA/Gambia poultry programmes and exchange visits, while calling for self-sufficiency in the production of chicken and eggs in the country.

He said they have been very much active within the global entrepreneurship network, which has huge resources at its disposal.

He urged students of the University of The Gambia to graduate with the mindset of creating jobs and not to be job seekers, adding that one of AmCham’s interests is focusing on youth and women entrepreneurship.

The new board members include Muhammad Musa (Papa) Njie, founder of the Youth Empowerment through Education and Sports (YETES) and a former staff at the United States Embassy in Banjul, the Director General at the Gambia Tourism Board, Abdoulie Hydara, and a representative of the Coca-Cola Company Ltd.

The retirees included one Assan Faye, Cas Gillen and a representative of Sheraton Hotel.

The 2014 financial and activity reports of AmCham were also presented at the AGM.

The chamber also reviewed and adopted its financial statement and discussed the 2015 activity plan, which included the Mother’s Day fun and cook out on 10 May, franchising expo in New York City on 16 - 18 June, food and beverage expo in Miami, Florida, on 26 -27 October, and pack expo in Los Angeles, California, from 2 to 5 November.

Speaking to The Point, one of the new board members, Papa Njie, promised to do his job as expected, saying he would bring another dimension into the chamber with his eight-year experience working with the US Embassy.

He would also engage youths in their development programmes, he said.

“I am very much interested in the media, the youths and women’s empowerment,” Mr Njie said, adding: “I will also look at how to promote the media to become more profitable enterprises in business.”