The foreign-based players will arrive at the via SN Brussels this afternoon, as they are set to rub shoulders with in the qualifying rounds of the African Nations Cup finals in Gabon\Equatorial Guinea on Saturday, at the Independence Stadium, Bakau.

The President of the Gambia Football Association, Seedy M.B Kinteh told Pointsport that two other players in Pa Saikou Kujabi and Abdou Jammeh (T-Boy) have already arrived in ahead of the highly-anticipated clash, as The Gambia continues to fight for a place in the continental showdown.

All the invited players to the exclusion of two other foreign-based players already in town, the rest of the squad will arrive to link up with the rest of their team mates ahead of the weekend's tie at the country's biggest football arena.

The team, the GFA boss added, will immediately after their arrival be taken to the Seaview Hotel, where they would camp.

However, Kinteh appealed to the general public on behalf of the GFA to stay away from the teams' based, to enable the players get maximum concentration ahead of what promises to produce a mouth-watering encounter.

All eyes will be on the senior national team who are drawn in Group F of the qualifiers along side and their weekend's opponents after other group mate withdrew from the qualifying campaign, due to financial constraints among others.

Meanwhile, tickets for the Saturday's match are begged at D500.00 for VIP, D100.00 and D50.00 for covered and uncovered Pavilions, respectively. 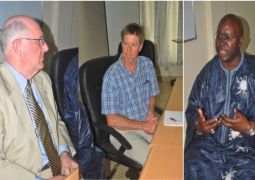