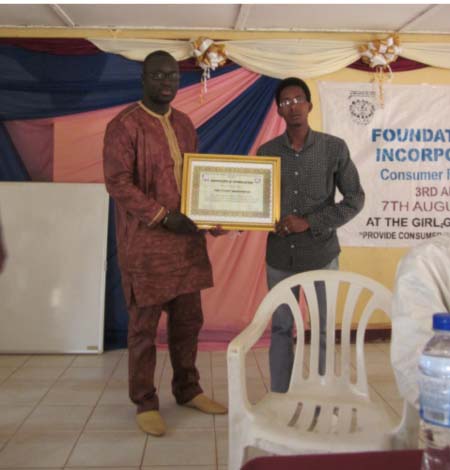 The Foundation of the Gambia Consumer Rights Protection Chapter (FGI-CRPC) Friday awarded The Point Newspaper certificate of recognition among other twenty-two institutions and thirty-one individuals for their outstanding support, and promoting consumer awareness culture towards the development of consumer protection rights and consumer-related issues in The Gambia.

The occasion, which marked the 3rd annual awarding ceremony since the inception of the project, was held at Girls Guide headquarters in Kanifing.

The awarding ceremony brought together awardees, government officials, representatives from the private sector, among others.

According to the CEO of FGI-CRPC, Soulayman Madi Sillah, they thought it significant to show appreciation to the institutions and individuals who have helped and continued to help them in achieving their goals in their quest to ensuring consumers are provided with good and safe food for consumption and thanked all those who helped them in their pursuit.